The name ‘HTC Vigor’ surfaced a few days back through a leaked imaged taken through its camera but today we have some more information regarding this phone. This information comes through benchmark scores that were ran on the phones and they aren’t exactly difficult to forge so take the following information with a pinch of salt. 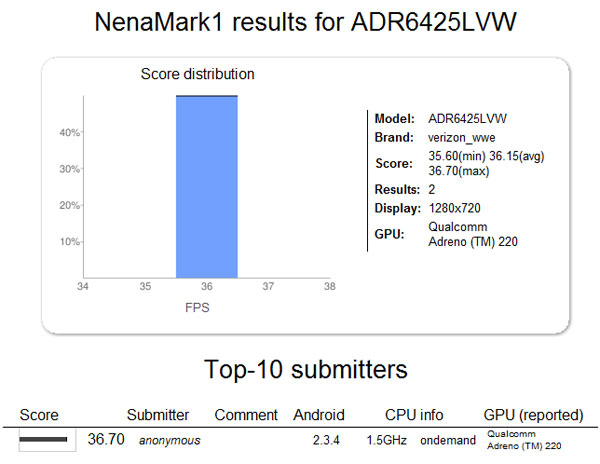 According to the NenaMark1 benchmark score, the Vigor with be available on Verizon’s 4G LTE network. It has a 1280 x 720 resolution display of unspecified size and a Qualcomm Snapdragon SoC with a 1.5GHz CPU and Adreno 220 GPU, quite likely the MSM8660 found under EVO 3D and the upcoming “Puccini” tablet. The device is also shown to be running on Android 2.3.4.

Now it’s rumored that this is a phone although it could very well also turn out to be a tablet. Maybe it is the CDMA version of the HTC “Puccini”. Having said that it will be far more exciting if the device turns out to be a smartphone, mostly because of the high resolution display. Hopefully we will find out more information about this mysterious device soon enough.

I new to all type of cel phone can somebody tell me how is the htc vigor phone perform.

I thought it was 700mhz. Definitely underclocked though