The set of controls on the HTC Windows Phone 8X should be pretty familiar - they are one of the essential Windows Phone requirements.

You get the mandatory three-button combo and the Start, Back and Search keys are all capacitive this time. They have pleasant haptic feedback, which can be disabled if unneeded.

The usual three button set below the display

The right side of the HTC Windows Phone 8X has the microSIM slot, the long and thin volume rocker and the dedicated camera key. The shutter key on the HTC WP 8X is pleasingly responsive with distinct half press. It will launch the camera even when the phone is locked and does so amazingly fast.

The right side is pretty busy

The left side of the HTC WP flagship is completely bereft of controls and connectivity ports.

The bare right side

At the top, you'll find the 3.5mm audio jack, the secondary microphone and the power key. The power/lock button is hard to locate by touch and stiff on press but the ergonomics aren't its only problem. This is by far not the most comfortable position for a power key in a phone of this height and we are not sure why HTC insists on placing it there.

The top is the hardest place to reach when you hold the phone in one hand. We often found ourselves using two hands to just unlock the smartphone, which is far from perfect. Even the Galaxy Note II, with its monstrous 5.5" screen is easier to wake up single-handedly.

The power key isn't quite easy to reach at the top

The bottom of the HTC Windows Phone 8X hosts the microUSB port and the primary microphone.

The microUSB port and the primary microphone

The 8 megapixel camera lens is at the back, right next to the LED flash. The loudspeaker grill is all the way across, near the bottom of the nice looking back panel. We liked the faux metal finish of the Ativ S, when we reviewed it last week, but the polycarbonate unibody of the HTC Windows Phone 8X has it handily beat.

The cool looking back panel

Where the HTC flagship loses some points, compared to its Samsung rival is the option to remove the battery cover and replace the battery. This means you are unable to carry a spare as a backup to the 1800 mAh unit inside the Windows Phone 8X, or replace the battery when it starts to show its age. The non-expandable memory on the HTC smartphone is another thing to consider.

HTC doesn't give official numbers for the battery life but we ran our own tests. The HTC Windows Phone 8X proved to be rather disappointing in this department, mainly due to battery-hungry standby.

It did quite well in the talk time test with just over 11 hours and it got average scores in the web browsing and video playback tests, but the overall result was an endurance rating of 31 hours - one of the lowest we've seen. 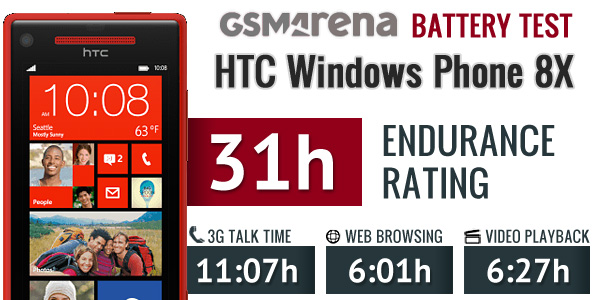 You can read more about the HTC 8X battery live in our blog post and if you're curious about how we do the tests, check out this article.

The HTC Windows Phone 8X uses a 4.3" S-LCD2 display of 720p resolution. The modest diagonal combined with the high pixel count results in a Retina-beating density of 342ppi.

As usual for HTC and its S-LCD units, the image quality here is nice with nice punchy colors and good contrast. It doesn't play as nice with the black backgrounds of WP8, but the Windows Phone 8X screen is still quite impressive.

Viewing angles are splendid too - there's some color shift when you reach extremes, but whatever is on the screen remains legible at all times.


You can learn more about the testing process over here.

Sunlight legibility is good, if unspectacular - the S-LCD2 is rather reflective, so it can't really take proper advantage of its good brightness here.

Moving on to the software now - the Windows Phone 8 examination starts right after the break.