Shortly after the HTC Windows Phone 8X announcement we learned that the SIM-free version of the device might cost a rather hefty £399. It turns out that wasn't entirely accurate as Three UK, will be selling the smartphone off-contract for the easier to swallow £350 ($564 / €436). 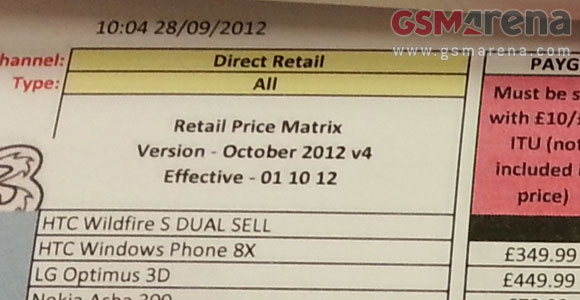 The image above was sent to us by a source from Three UK who wished to remain anonymous. As you can see, the PAYG (no-commitment) price of the smartphone stands at £350. You will also be able to grab the HTC Windows Phone 8X for as low as £29 if you are willing to sign a two-year £30/month contract.

The full list of Three UK plans for the HTC 8X

There's still more than a month until the 8X arrives in UK on November 15, so let's hope other UK retailers follow Three UK's lead and bring their prices down as well.

Another troller identified. This self confess WP user is sitting on floor tiles locked behind Windows consist of 8 bars. With only a mere 4% OS market share and making so much noise.

Windows phone 8 will be the most intuitive OS on a phone. So many features have not been announced yet. Anyone that thinks Windows phones is boring clearly hasn't used the phone or set the phone up fully.

My boring windows phone is so boring and restricted and all the apps cost a fortune.Its even out of date now after microsoft conned me into buying such a horrible device.Ill never waste money on boring rubbish like this again.