As expected, today Google announced its latest tablet - the HTC-made Nexus 9 tablet. The tablet runs on Android 5.0, which has just been confirmed to be called Lollipop and packs a 9" IPS LCD with the unusual for Android aspect ratio and a resolution of 2048 x 1536 pixels (that's 4:3 aspect ratio). The 7.9mm thick Google Nexus 9 is powered by the Nvidia Tegra K1 chip with a 2.3GHz CPU, the very potent Kepler DX1 GPU and 2GB of RAM. The available storage is either 16 or 32GB, but there's no expansion slot. 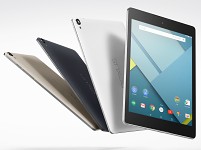 The HTC nature of the Google Nexus 9 shines through with the BoomSound stereo speakers. For your photography needs the tablet features an 8MP rear camera and a 1.6MP front-facing snapper.

Google fit a 6,700 mAh battery inside the Nexus 9, although it hasn't provided any estimates on how long it will last on a charge.

Power users will appreciate the optional keyboard that Google unveiled alongside the slate. It magnetically attaches to the back of the Nexus 9 and should provide a huge boost to productivity. 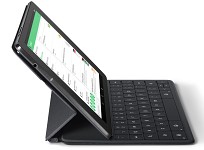 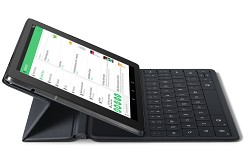 The Google Nexus 9 will be available in on preorder starting from October 17, while actual sales begin on November 3. Available colors will be black, beige and white. Pricing is yet to be confirmed, though.

Thickness = Battery. Which would any sane person rather choose?

You know absolutely nothing about Android. The entire Microsoft Office suite is free on the Play store T_T

Oh come off it you can't put a single f# FHD movie on a device with 16GB storage nevermind a QHD one which is the device's native resolution and that is if you put on nothing else!!