The AnTuTu team keeps a watchful eye on its database for unannounced phones and not one but two entry to mid-range HTC phones were caught in their net. The first one is HTC's octa-core phone that we've been hearing for the last few months.

The HTC D616W likely belongs to the Desire line and features MediaTek's MT6592 chipset. It has eight Cortex-A7 cores at 1.6GHz, a Mali-450 GPU and somewhat disappointingly low 1GB of RAM. 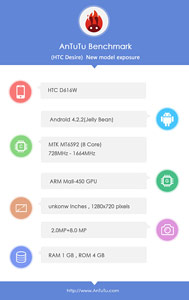 The phone has a 5" 720p screen as rumored and runs Android 4.2.2 Jelly Bean (MediaTek still hasn’t pushed any of its chipsets beyond 4.2.2). The internal storage is the measly 4GB, meaning there's most likely a microSD card slot, too.

The HTC D616W packs an 8MP main camera and a 2MP front-facing camera.

AnTuTu speculates this is the China Unicom version of the phone. It's unlikely that this is the Desire 8 (screen sizes and camera resolutions don't match). Earlier rumors put the price at CNY 2,000 or about €240.

The second phone sits below the D616W and is appropriately numbered D516W. This one is powered by a Snapdragon MSM8610 chipset with four Cortex-A7 cores at 1.2GHz and Adreno 302 GPU, plus 768MB RAM. Note that AnTuTu detected the GPU as Adreno 305, but that's likely a mistake. It's running a slightly newer version of Android, 4.3 Jelly Bean. Storage is even lower, 2GB, making the microSD card slot a guarantee.

The AnTuTu team whipped up a chart, comparing the performance of the two chipsets – it seems that the Adreno GPU holds its own against the Mali-450 (keep in mind the resolution difference), while the CPU is a good deal behind the octa-core setup (more cores at higher clock speed, no surprise here). 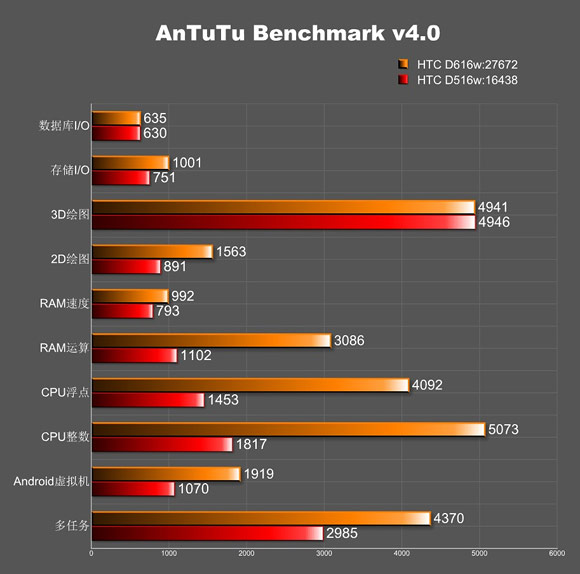 Thanks to Erwin for sending this in!

Is people reading the article, it has 1 GB RAM and crappy camara and screen ( Compare with other phones)

Windowns OS is one of the most bizarre Os