Huawei A199 goes official in China, has dual-SIM GSM/CDMA

Huawei has just announced its new A199 model with 5.0-inch 720p IPS display and powered by Huawei's own K3V2 chipset featuring a quad-core 1.5GHz processor.

Huawei A199 is a China Telecom exclusive and comes with dual-SIM support and is capable of dual GSM/CDMA standby. Note that 3G connectivity is available only in CDMA mode. 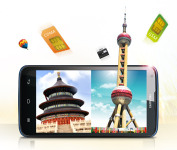 The rest of the A199 specs include an 8MP rear and a 1.3MP front-facing camera, 2GB of RAM, and 8 gigs of internal storage expandable via a microSD slot. The A199 runs on Android 4.1 Jelly Bean and comes with Huawei's Emotion launcher on top of it.

The smartphone will hit China Telecom's network later this week.

Huawei A199 has leaked before as the Ascend G710, so there is a good chance it escapes China Telecom's chains and launch elsewhere too.

Hi im interestd in buyng this set in india can I use cdma in india also, will it lauch in india

Has anybody found a way to unlock the phone? My cdma card wont work despite havong the same 800mhz frequency