In late October at an event in China, Huawei announced its first phablet - the Ascend D2. At the time Huawei stayed mum on some of the key specs of the device. Thankfully, GLBenchmark comes to save the day, confirming the chipset and screen specs of the device. 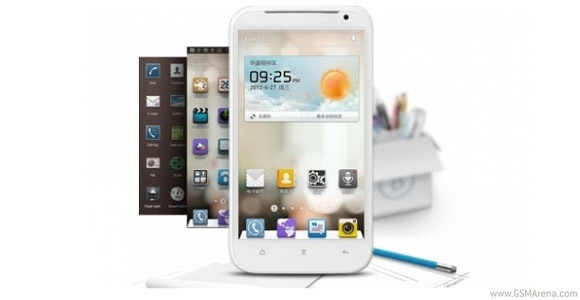 At the front the Ascend D2 features a 5-inch LCD display of FullHD (1920x1080 pixels) resolution, matching the screen of the HTC DROID DNA (and the upcoming rumored Lenovo and LG F240 smartphones).

Unlike the Ascend D1, which Huawei stuffed with a dual-core TI OMAP 4460 chip, the Ascend D2 is powered by a quad-core chip operating at 1.5GHz.

Presumably, that's the company's home-brewed K3V2 -the chipset powering the Huawei Ascend D quad. The Huawei custom designed chip turned out to be quite hard to manufacture, though and caused several delays in the availability of the D quad, which was announced back at the MWC in February. Hopefully, Huawei will have resolved all issues with the production by January 2013, when the Ascend D2 is expected to debut.

GLBenchmark reports the Ascend D2 is running Android 4.1 Jelly Bean with Huawei's Emotion UI on top. There's also a very high chance of an update to Android 4.2 coming shortly after the official launch. 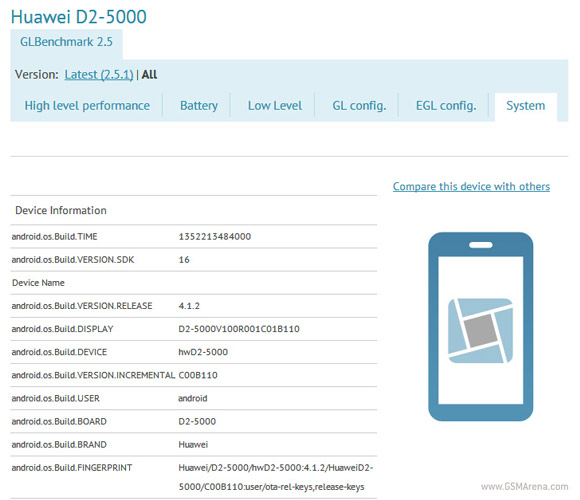 According to a tipster of ours, the Huawei Ascend D2 is going to also be dust and water-proof and is going to sport a 13MP snapper at the back. Additionally, he suggests the phablet is going to be powered by a quite beefy 2920mAh battery. Take this with a pinch of salt, however, since Huawei hasn't confirmed any of it officially.

Pricing and availability are still anyone's guess. Huawei is known for its competitive pricing, but the Chinese tend to take their time bringing their smartphones to the market.

Thanks for the tip, Benton!

I’m not sure how I feel about Jelly bean, but if it is 4.2 the kinks should be worked out by now I would think. Huawei is a fairly new company but hopefully they’ll have more about their products at CES this year. Right now I use my Note II for wor...

Huawei is good company, but need to advertise to beat others. This product seems to be awesome.

when will hauwei will launch in india