Huawei are making sure they're taken seriously as a phone maker. They're actually well past the newcomer stage and, with a market the size of China behind them, Huawei's appetite will only be growing bigger to compete with the establishment.

Huawei didn't start with a bang, there was - inevitably - a stage of copying and imitation, but we found some of its phones to be quite good - reasonably priced alternatives of existing devices by major manufacturers, and not without some nice custom touches either. 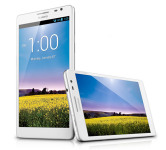 While the Chinese have proved to be fast learners in smartphones, the Ascend Mate is perhaps a throwback to their early days of mixing and matching. The Mate is the Chinese take on the Samsung Galaxy Notes - low-cost but quite up to date in terms of equipment, for a midrange phablet that is.

And by the way, they might just be doing things right. Samsung's Mega 6.3 is probably in equal measures an attempt to make the Note experience available to the masses and a response to genuinely affordable, and seemingly quite competitive, products like the Huawei Ascend Mate.

So, this is Huawei's first foray into phablets but the Chinese have a handful of smartphones and tablets under their belt which, at least on paper, are no worse than the competition's flagships. A crossover was only a matter of time obviously.

Samsung's success with the Note, followed by LG and their Optimus G Pro, swung the door wide open for the smaller brands to start exploring the phablet form factor too.

The Huawei Ascend Mate is a prominent figure in this trend and its 6.1" screen sees it squeezed between two serious rivals, the Samsung Mega pair. It's worth noting though, that Huawei were well ahead of Samsung in announcing their device.

Like most of the latest generation of Huawei devices, the Ascend Mate is powered by the company's home-brewed K3V2 chip. That's probably not top-of-the-line technology, but four Cortex-A9 CPU cores clocked at 1.5GHz and a 16-core GPU, is the same combo powering their current 1080p-screen flagship, Ascend D2. It should be more than capable to keep Android running glitch-free at 720p resolution.

The Huawei Ascend Mate has got some special software treatment too. The gadget is running Android 4.1.2 Jelly Bean, but it's been seriously redesigned with Huawei's own Emotion UI for a clean and simple user interface that omits an app drawer and keeps the widgets.

We'll get to into the details in due course - the hardware checkup is first on our list. Hit the next page to get a better feel of the Huawei Ascend Mate.

i played games with the charger on my huawei ascend mate, but suddenly it turns off and never on again. many times i try to on the power but its still the same result. what should i do? please do advice.

How can i ipgrade my ascend mate to jellybean 4.2.4?