The Huawei Ascend Mate's retail package offered no surprises - the device comes with the essential accessories in the shape of an A/C adapter, a USB cable, and a headset, along with the usual paperwork.

The Ascend Mate's weight is about the same though - 198g.

It's not the added millimeters around the waist though, that you will actually feel in terms of handling. The Huawei Ascend Mate is more angular and boxy, and therefore, a bit less comfortable to hold. The styling however is superior to that of the Mega 6. 3.

We are happy with the matte finish of the back. It's nice to the touch and doesn't get covered in fingerprints, along with having a non-slip feel. Sure, the flat sides and angular shape of the phablet render it a bit less comfortable to hold than the curved Mega 6.3, but this design has its advantages too. For one, a readily accessible memory card slot is most welcome, and the extra thickness has allowed room for a massive battery, which is one of the highlights of the Chinese phablet.

The front has rather generic looks but there's little they could've done about it. Trying to be creative could've easily backfired at this size. That said, Huawei has managed to keep the footprint as small as possible by reducing the bezel (the screen covers 73% of the front). Another thing that helps usability is the customized UI that offers one-hand mode (it's similar to Samsung's solution of squeezing the keyboard and dialer horizontally to make buttons easier to reach).

The screen is covered with Gorilla Glass, actual generation not specified, and there're no navigation controls whatsoever, regular buttons or capacitive keys. The Android controls are on-screen only, placed on an auto-hiding navigation bar.

The Huawei Ascend Mate has dark-chrome trimming running all around the sides that goes well with the angular styling of the handset.

The Mate will fit in a pant pocket easily, but it's the kind of device that will certainly make its presence felt - to begin with, you wouldn't be too comfortable sitting down with the phablet in your pocket. A device this big - and one that weighs a solid 200g too - will take some time getting used to, but single-handed use isn't entirely out of the question. After all, most people will be there for the screen size and they should be well prepared what to expect.

There is a lot going on above the display: the earpiece is covered with a protective grille, with a status LED in its left corner.

A peak above the display

The 1MP front camera is near the top right corner of the device, with proximity and ambient light sensors nearby.

There is nothing of interest below the display, since all of the controls are now part of the OS.

The volume rocker and the Power/Lock key are positioned on the right side of the Huawei Ascend Mate. There is no dedicated camera key.

The right side of the Ascend Mate

The left side of the Ascend Mate features the hot-swappable microSD card slot, sealed by a plastic flap.

The microSD slot is on the left side

At the top of the Huawei Ascend Mate we have the 3.5mm audio jack, microSIM slot and the secondary microphone. The mic pinhole is so close to the SIM slot that it can be easily mistaken for a SIM eject hole, especially with the SIM pictogram right above it. Well, it's not, so don't try to stick a pin in it. The SIM compartment works exactly like the memory card slot - undo the flap with a fingernail and push the card to eject.

The top has the audio jack, the SIM slot and the secondary microphone

The microUSB /charging port is at the Ascend Mate's bottom. The primary microphone is right next to it.

The microUSB port and the primary microphone at the bottom

The 8 megapixel camera lens is centrally placed at the top of Ascend Mate's back. The single-LED flash is around too. You can spot the loudspeaker grille in the bottom left corner.

The 8MP camera lens at the back

The Huawei Ascend Mate is fed by a 4050 mAh battery, and the tinge of disappointment at it being a non-removable unit soon gave way to cheer. It walked out of our battery as the only device that has ever matched the current champion. With a rating of 81 hours the Huawei Mate is easily the new standard-setter, considering the Motorola RAZR MAXX is well past its prime now. 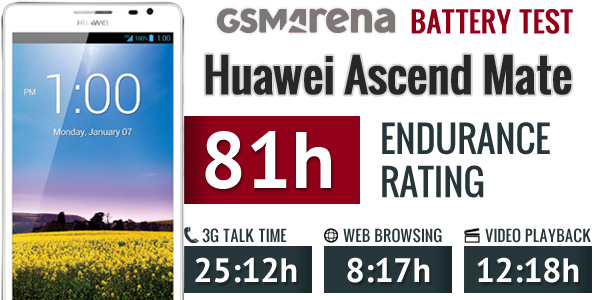