Huawei Ascend Mate comes with the stock Android 4.1 Jelly image gallery. The Default view of the gallery is Albums, which is what we're used to seeing - it lists all folders in the phone as stacks of photos.

An app called Movie Studio handles editing videos and it's quite feature-rich. You can add multiple videos to the timeline and trim their start and end points, you can add titles and effects (including transition effects) add music and there are multiple options available when you decide to export the video (resolution, quality, etc.).

Video player is part of the gallery, will plays anything

The Ascend Mate doesn't have much of a video player - you just open videos from the gallery and that's that. On the up side, it handled most videos we threw at it - all the way up to 1080p, DivX, XviD, MKV and even WMV.

The equalizer presets are available only when headphones are plugged in

Subtitles are supported, you just need to name the subtitle file the same as the video.

The 6.1 HD display is great for watching movies on the go. In case you need more functionality, you can also download a third-party movie player.

The Huawei Ascend Mate comes with an app called Music that is an updated version of the stock music player. It launches with three of the recently played tracks and a list of all available sorting options: All songs, Favorites, Playlists, Artists, Genres, Albums, and Folders. As soon as you choose one those, the interface switches to tabs.

The Now playing interface features more eye-candy including album art. You can swipe to skip tracks or tap on one of the floating album covers to bring out a list of all songs in that album.

Below the album art is an upwards pointing arrow, which brings out a panel with the song lyrics.

The Music app offers non-customizable equalizer presets only when you plug in a pair of headphones. You can get to the equalizer with a tap on the Dolby Mobile key at the top of the Now Playing screen. In case you are using the loudspeaker, the Dolby logo will only toggle Dolby Mobile on and off.

The phone will automatically look for lyrics • Equalizers

The Huawei Ascend Mate has a built-in FM receiver. It can play through the headset or the loudspeaker, but you'll need to have the headset plugged in as it serves as an antenna. We were disappointed not to find RDS - radio stations need to be named by hand.

The Huawei Ascend Mate was also subjected to our usual audio quality testing routine and its scores came out pretty good. It's output was rather quiet in both parts of the test, but it was clean enough to please the majority of users.

When connected to an active external amplifier the Huawei Ascend Mate managed excellent scores all over the field with no weak points to its performance.

When we plugged in a pair of headphones, stereo crosstalk increased quite rapidly and some intermodulation distortion crept in. It's good overall, but extremely demanding audiophiles might not be perfectly happy. 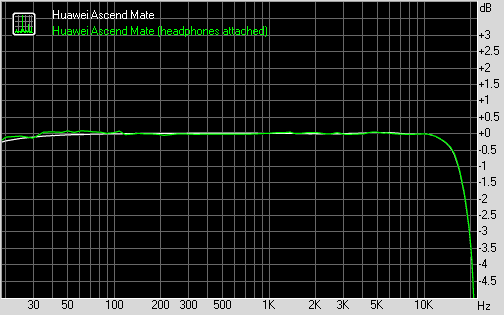