Besides Album view you also get Locations (photos are grouped based on where they were taken), Times (grouped by when they were taken), People (if the photos have tagged faces in them) and Tags (these are general tags you can manually add).

Getting inside an album displays all the photos in a rectangular grid, which is horizontally scrollable. When you try to scroll past the end, the thumbnails will tilt to let you know you cannot go further.

When viewing a single photo, you'll find a share and a delete button, with a line of small thumbnails underneath of all other photos in the album. You can tap those small thumbnails to move to other images or you can just swipe to the side.

From the menu you can access simple photo edits (rotate, crop) or go into a more capable editor with a lot more options. The editor offers light adjustments (so you can bring out the shadows or the highlights), effects, color styles, red eye correction, straightening, sharpening and face glow (which detects faces automatically). Most of these options have a slider to apply the desired level.

An app called Movie Studio handles video edits and it's quite feature-rich. You can add multiple videos to the timeline and set their edit points, you can add titles and effects (including transition effects), add music and there are multiple options available when you decide to export the video (resolution, quality, etc.).

Video player does 1080p of all kinds

The the Ascend P1 doesn't have much of a video player - you just open videos from the gallery and that's that. On the up side, it handled most videos we threw at it - all the way up to 1080p, coming from DivX, XviD, MKV and even WMV.

We didn't encounter any issues with sound (AC3 and DTS codecs give most phones headaches) and there's Dolby Mobile 3.0+ available to enhance the audio.

Unfortunately, the video player would get buggy every now and then and refuse to play anything. Thank goodness for that quick restart feature.

The functionality is still very limited - you get play/pause and a slider to scrub through the video but that's it, there isn't even subtitle support.

On the upside, the 4.3" Super AMOLED with qHD resolution is great for watching movies on the go. You can also download a third-party movie player, if you need more functions (like subtitles).

There's also HD TV-Out available to use the Ascend P1 for a media player at home thanks to the MHL support of the microUSB port.

The Huawei Ascend P1 comes with an app called Music+ that is an updated version of the stock ICS music app. It uses tabs to organize your music library - there's Playlist, Artists, Albums, Songs, Genres and Folders.

The Now playing interface features more eye-candy including music visualization and the album art arranged in a Cover flow-like fashion. You can swipe between songs or tap on one of the floating album covers to bring out a list of all songs from that album.

Below the album art is an upwards pointing arrow, which brings out a panel with the song lyrics.

The Music+ app doesn't have an equalizer, but it does feature Dolby Mobile 3.0+. There're no settings to it though, just an On/Off toggle.

The phone will automatically look for lyrics • Dolby Mobile 3.0+ is available

The Huawei Ascend P1 has a built-in FM tuner. It can play through the headset or the loudspeaker, but you'll need to have the headset plugged in as it serves as an antenna. We were disappointed not to find RDS - radio stations need to be manually named.

The Huawei Ascend P1 did impressvely well in the active external amplifier part of our test. The smartphone got excellent scores all over the field and had average loudness, so it should do quite well, powering your car audio system.

The good news is that only one reading takes a serious hit when you plug in a pair of headphones. Granted, the stereo crosstalk spikes to pretty high levels, but the other aspects of the Ascend P1 performance remain great and the volume levels are still decent. A pretty solid overall performance, no matter how you look at it. 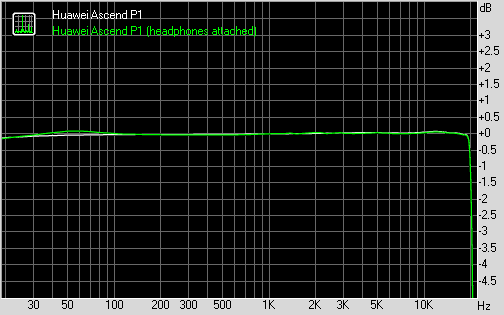