The official photo of the Huawei Ascend P6 leaked earlier and now the live photos of the upcoming flagship smartphone have appeared along with its benchmark results.

The images of the Huawei Ascend P6, which will be one of the slimmest smartphones in the market, show the presence of volume rockers, power button and the two SIM card slots that are located on the right side of the smartphone. 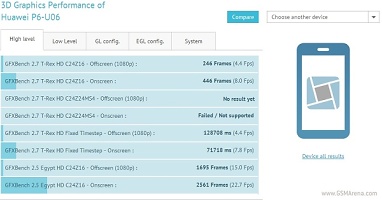 The yet to be announced Huawei Ascend P6 has been spotted in the GLbenchmark database too and according to its scorecard, it sports a 4.7-inch display with a resolution of 720 x 1280 pixels. Furthermore, the Ascend P6 will be powered by a 1.5 GHz Hass K3V2 quad-core processor and run on Android 4.2.2 Jelly Bean.

Huawei Ascend P6 is said to come out with 2 GB of RAM, 8 GB of internal memory, 5 megapixel rear camera and Emotion UI 1.6.

Huawei is expected to introduce its flagship smartphone at a press event in London on June 18 and the Ascend P6 might be priced around $330.

Thanks Sushil Goyal, for sending this in!

They will be releasing 4.2 for D Quad and it was actually posted on gsmarena.Check it out.