The Huawei Ascend P6 entered our rumor mill a while ago with full specs, official and live pictures coming since. Today Huawei finally is holding a press event in London where it promised to show the Ascend P6 officially.

Well, the event is still half an hour away but Huawei has just made the Ascend P6 official via a press release. It might have been a mistake by someone in the PR department as the page has been taken down since, but the info is already out.

The key selling point of the Huawei Ascend P6 is its extremely slim profile - just 6.18mm. According to the company that's enough to guarantee it the world's slimmest smartphone title. The Ascend P6 is also quite light at 120 grams.

The rest of the Ascend P6 features include an 8MP primary camera (BSI, F2.0) with 1080p video recording, a 5MP front snapper for video chats and self-portraits, 8GB expandable internal storage, and a 2000 mAh battery.

The connectivity department of the Huawei Ascend P6 may lack LTE support, but has covered most other bases. The Ascend P6 comes with HSPA, Wi-Fi, Bluetooth and FM radio. 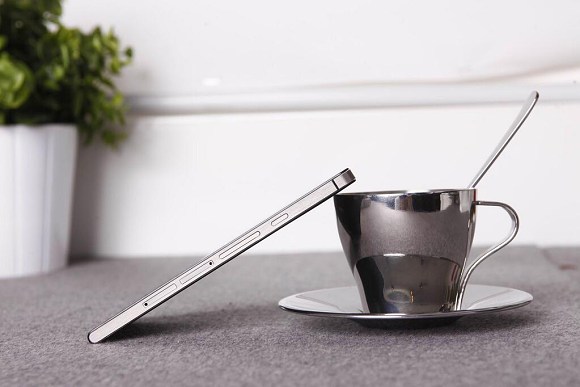 Huawei Ascend P6 runs on Android 4.2.2 Jelly Bean with Huawei's Emotion UI on top of it. You'll get a chance to see the Emotion UI in action later today as part of our upcoming Huawei Ascend Mate review.

Huawei Ascend P6 will hit the shelves in China this month, while Western Europe will be getting it in July through a bunch of carriers and retailers. The partners already confirmed include Vodafone, Telefonica, Orange, H3G, O2, Carphone Warehouse, TalkTalk, Media Markt, Saturn, TIM as well as online retailers Amazon and CDiscount.

Other markets should follow soon after the Western Europe premiere.

Great phone indeed, but I'd rather have it a bit thicker with a much better battery life though.