The Huawei Ascend P7 introduces a brand new IPS display of 1080p resolution. This works out to an excellent pixel density of 455ppi, which is among the best in the 1080p class.

The display offers really wide viewing angles with minimum color distortion. The colors are great, the blacks are quite deep and the contrast is excellent too. We are very pleased with Huawei's latest display and image quality.

The screen glass is reflective and the sunlight legibility, while not great, is still decent and you won't have much trouble operating even under direct sunlight.

The Huawei Ascend P7 also offers the rare option to adjust the screen's color temperature. It's a slider that gives you control on whether the screen has a cooler or warmer (blue vs. amber) tint. 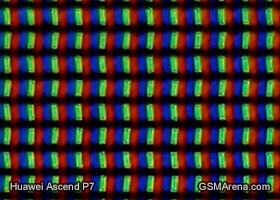 The Smart Backlight is also available - it assures the automatic brightness control doesn't do rapid jumps when adjusting the illumination level. If switched on, the Ascend P& will calculate the next light transition point in a bright lighting environment and maintain a gradient brightness variation.

Finally, Huawei Ascend P7 also supports Gloves Mode - once enabled you can operate the screen with gloves, but this mode will also reduce the battery life.

Above the screen is what must be the highest resolution front-facing camera yet - an 8MP shooter with a Back Side Illuminated sensor, face enhancement and dedicated panorama mode. The earpiece and a couple of sensors are also around.

A peek above the Ascend P7's display

The sides are still flat with a nice metallic feel to them. The right side has been redesigned slightly, the power button is now round and has moved between the volume rocker and the card slots. The top slot is for microSD cards, while the bottom one accepts microSIMs. There is nothing on the left.

Another change is that the 3.5mm audio jack has moved to the top and is no longer plugged by an eject tool. That tool was quite helpful as it was needed to open both card slots and protected the audio jack from dust.

The secondary microphone for noise cancellation and stereo video recording is right next to the audio jack.

Across at the bottom lie the primary microphone and the microUSB port used for charging, PC connections or USB OTG.

A detailed look at the bottom

The 13 megapixel camera lens is placed in the top left corner of phone's back. The single-LED flash is next to it too. The aluminum loudspeaker grille is in the bottom left corner.

You can launch the rear camera while the screen is locked and immediately take a picture by double-clicking the volume down key. The whole process from launch to snapping a picture is done lightning fast at 1.3s. We've tried it by ourselves a few times and it is indeed quite handy, but you should point the phone right where you want to shoot and then hit the shortcut. Also we noticed sometimes the camera fails to focus because of the super-fast capturing. Hopefully Huawei will tweak this feature further before the official launch.

Huawei Ascend P7 at the back

We ran our traditional battery test and the results are in. The Ascend P7 pulled an overall rating of 53 hours. The 53-hour rating means the Ascend P7 will last two and a little over two days on a full charge with an hour each of calling, browsing and watching video daily. 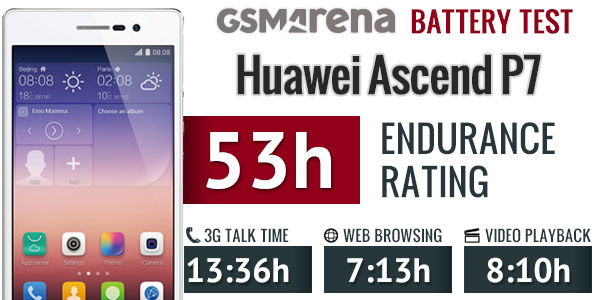 For a more detailed breakdown of the Huawei Ascend P7 battery performance check out our blogpost.