Huawei Ascend P7 announced with focus on design and selfies

The Huawei Ascend P7 is now official and is ready to pick up the duties as the company's 2014 flagship. Compared to its predecessor, the Ascend P6, the new flagship brings a much better screen as well as major upgrades in the design and camera departments.

First up, the phone is slightly larger with a 5" 1080p display covered with protective Gorilla Glass 3. The phone's measurements are 139.8 x 68.8 x 6.5mm, which is slightly taller, but thinner and narrower than the Samsung Galaxy S4, for instance. The Ascend P7 weighs 124 grams and that's spot on for a phone of this nature.

The back of the phone is also covered with Corning's Gorilla Glass 3 underneath which lies a micro pattern that Huawei made with a seven-stage surface treatment. There's also a notification LED above the display.

The latest version of the UI sports visual improvements in addition to a bunch of new features. They include a new permission manager, revamped Do Not Disturb mode and new power saver regime. Internal memory is 16GB and is expandable by up to 32GB via microSD cards.

The Ascend P7 features a 2,500mAh Li-Po battery that by Huawei's estimates is capable of enduring 404 hours of 4G stand-by time and 14 hours of talk time. The phone charges up to 100% in 3.5 hours using the included charger.

Huawei has focused on boosting the photography capabilities of the Ascend P7, namely taking selfies. The front-facing camera features an 8MP BSI sensor and 5-pieces lens coupled with IMAGESmart 2.0 software that boasts 10 level auto-facial enhancement and wide-angle photo function. On top of it all, there's a special shooting mode for taking panoramic group selfies - Huawei calls it "groufie."

At the back, there's a 13MP snapper with a Sony BSI sensor and f/2.0 aperture coupled with an LED flash. It shoots 1080p video (sorry, no 4K here) and can also take with voice activation. 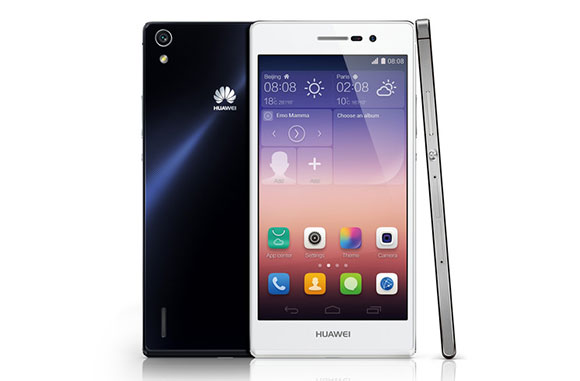 Network connectivity options have been enhanced to include LTE, while local connectivity is covered by Bluetooth 4.0, Wi-Fi 802.11n, microUSB 2.0 and NFC.

The company will also be releasing accessories including the TalkBand B1 smart wearable, colorful protective cases, clamshell protective screen covers, and portable batteries.

Between this phone and the nokia lumia 735/830, which one is cheaper?

I bought this phone last week for 1,300 RMB (approx 208 USD) on-line at www.JD.com in China. Works very well so far for a midrange cell.