Huawei Ascend P7 gets a software update in Europe

The Huawei Ascend P7 is now in the process of getting its first ever software update. This has been confirmed to be happening in Germany, though the software version seems destined for the whole of Europe, so you should probably expect to see the new bits roll out to more countries soon (if they haven't done so already).

The Android version after applying the update will still be 4.4.2 KitKat, just as it was when the device launched. The same goes for Huawei's overlay, called Emotion UI, which is still at 2.3. 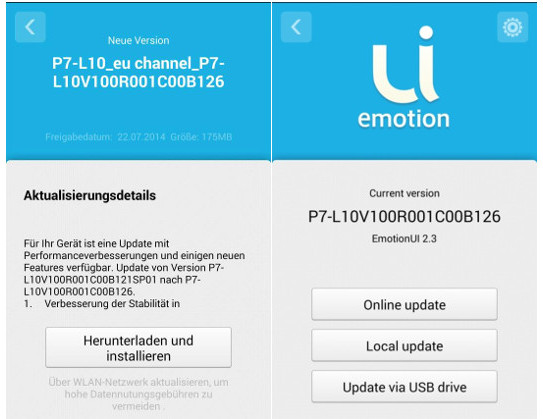 As you may have gathered from the above information, this update is minor. It will change your firmware version to B126, and it will apparently bring your P7 some improved stability. Bugs have surely been fixed too.

The update is arriving on Ascend P7 units in Germany over-the-air, and once you're notified that it's available it can be immediately downloaded and installed straight from the phone itself - no need to use a computer in this case.

If you want to learn more about the Huawei Ascend P7, you can always read our review of the handset.