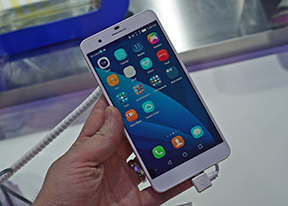 The Huawei Honor 6 is definitely a weird combination of unimpressive design and oddly productive hardware for the price tag. Glancing at the specs on the Honor 6 a few things definitely stick out, bearing in mind that at the time of writing this it can be purchased for around $340 for the 16GB version, which is less than a premium.

For this you get very nice Full HD 5-inch screen that really looks pleasant in person. It's very crisp with its 441ppi pixel density and it has decent viewing angles. The in-cell design has eliminated the gap between the LCD panel and the front glass making for a much slicker visual that almost pop-out. Glancing further down the sheet the 3GB of RAM cannot be left unmentioned, which is definitely flagship territory.

The prevailing feeling that the Honor 6 carries across is that Huawei really tried to aim at high-end hardware for an affordable price and seem to have got that right. The phone works surprisingly fast and handles multitasking and graphics-heavy games with equal ease. The key seems to lie in the custom HiSilicon Kirin 920 chipset and octa-core CPU. The platform seems very well optimized and surprisingly productive for a mid-range smartphone.

The ramped-up specs do however come at a price and a noticeable one. On the exterior the Huawei Honor 6 is less than impressive, in fact it is surprisingly dull and the shell looks and feels cheap and unimpressive. This however does not mean that the device isn't well built. It feels pretty sturdy, but the point here is that Huawei have definitely skipped on some design work.

The flat, straight-edge design with rounded corners is very reminiscent of the iPhone 6 where much of the inspiration seems to come. Huawei have even tried to include that signature metal-effect rim in an obviously plastic shape, but perhaps to be on the safe-side it only extends to the bottom edges, leaving the rest of the dull white plastic exposed, a really odd design choice.

Another point worth mentioning is the absence of buttons on the front of the device, unlike most of its predecessors, leaving the space below the screen kind of empty. This is perhaps a move intended to coin a new brand identity for the Honor line, separating in from the rest of the manufacturer's device lineup and the theory is further backed up by the absence of a clearly visible Huawei logo on the phone.

As a whole the Huawei Honor 6 achieves what it sets out to do - it offers above average performance at an affordable price for anybody who is willing to sacrifice a little visual appeal for the sake of productivity.

The presence of the Huawei Honor 6 Plus at CES 2015 is what really excites us as it is very recent, having debuted just last month (December 2014). Naturally we took a stab at it too. As whole, the similarities with the Honor 6 are more than apparent and much of what we already mentioned applies. This is all but justified given the relatively little time that separates the two device releases. The Honor 6 Plus inherits a lot of the design of its predecessor, right down to the plasticky rim only in a larger format.

Other than being larger this Honor smartphone improves on almost every other technical specification. The chipset here is a HiSilicon Kirin 925, which is a notable improvement. The camera has received a significant overhaul as well.

The Huawei Honor 6 Plus comes equipped with a dual camera setup, very similar to the one found on the HTC One (M8). It allows for shots to be re-focused after being taken.

Huawei has also managed to fit a fairly big sensor into the device. With a 1.98-micrometer pixel size, it comes very close to the "Ultrapixel" by HTC.

The 8MP front-facing shooter is nice touch as well.

On the physical side of things the situation is pretty much the same. What you get is basically a scaled-up version of the Honor 6 with a few changes in colors and finishes, but basically the same, far from premium feel.

The body has a patterned finish, but it is barely noticeable and only under certain angles and is nothing to be overly excited about. Huawei seem to be sticking to their tactic of differentiating the Honor brand and there is no Huawei logo on the device.

The 32GB version of the Honor 6 Plus currently goes for about $520, which is a fair deal more than the aforementioned $340 for its cousin. But the bigger display and even better performance and let's not forget the double camera setup you can really see what you are paying for and in this respect the smartphone has a lot of appeal to the right crowd.