Huawei Honor 7 and Honor 7 Plus leak

Huawei, being the industry giant it is, is apparently not content with having just the P8 and P8 Max flagship pair out there and is working on another high end duo to represent the Honor brand. Rumor has it that there will be a larger Honor 7 Plus model and a more compact vanilla Honor 7. 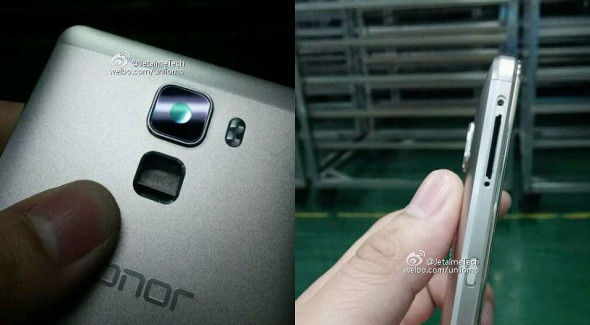 From the images we've got it appears that the two devices will look rather different. The Honor 7 Plus is reported to sport a fingerprint sensor under its main camera on the back in an arrangement similar to the existing Huawei Ascend Mate7 phablet. Both the Honor badge and the overall design suggest that the pictured device might be the real thing.

Display size is expected to be 5.5 inches and screen resolution is more than likely going to be FullHD. The list of rumored specs goes on with an in-house Kirin 930 or 935 chipset, 3GB of RAM and 16GB of storage.

Meanwhile what is allegedly the regular Honor 7 model sports a dual-camera arrangement on the back, not unlike the currently available Honor 6 Plus. While on the Honor 6 Plus the two cameras are created equal, the Honor 7 seems to put an emphasis on one more than the other, possibly with a difference in aperture in favor of the bulkier one.

Now, this one has a few design clues borrowed from the Ascend G7, so it may end up being a continuation of that lineup, for all we know. No specs have been revealed on this second device.

Obviously, you should take all this info with a pinch of salt, as the Honor 7 and Honor 7 Plus are new to the rumor mill and all of the above may change as the the smartphones are being developed.

You can chat some crap on here so iPhone has copyright to numbers now? 7 Enjoy your Round phone with letters..

Sakthi did you paid any custom duty?

If you cannot resist you can buy it through Oppomart Online. I got it from there. It is a Flawless Phone