Honor included an 18:9 display with FHD+ resolution (1,080 x 2,160 px) and it looks pretty good. It has great viewing angles with no color shifting. We kind of wish it packed more pixels, but if it did, then Honor wouldn't be able to offer it for this price. Honor didn't specify which kind of glass the phone uses, so we'd suggest you don't remove the factory-installed screen protector. 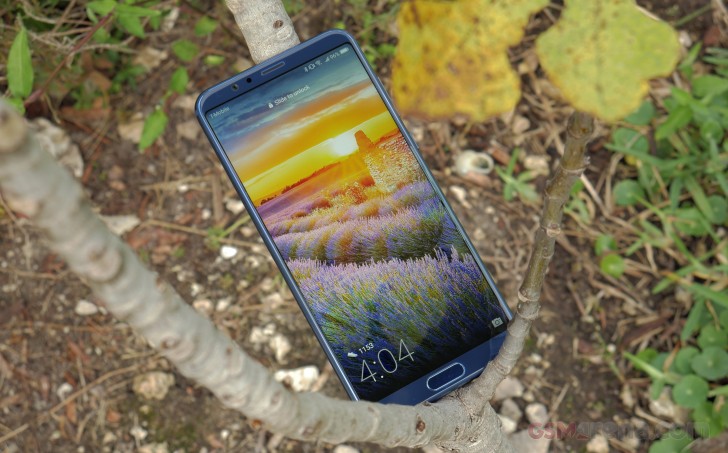 When it came to testing, the Honor View 10 did fairly well. The phone was able to reach a great 506 nits of full brightness. This was achieved in Auto mode, however. Switch Auto mode off and the phone will display 453 nits when the brightness meter is cranked up.

Contrast ratio was quite good, too at 1,629:1 - blacks are generally quite dark, but become more noticeable as the screen goes up to its brightest.

As for nighttime use, the Honor View 10 produced very dim lighting at minimum brightness - just 1.5 nits. Granted, you need to set the brightness manually to get this low.

Sunlight legibility was great. The display boosts up in direct sunlight to show what's being displayed as best as possible. Going back to the factory screen protector, we removed ours and the bare glass isn't oleophobic so fingerprints accumulate much more, which obstructs the view of the LCD panel in direct sunlight. No biggie, just keep it clean.

This display reproduced an average deltaE of 6.2, which isn't terrible, but whites did appear a bit on the cooler side and were generally almost 11 units off. Switching to the "warm" setting in the color temperature option yielded much more accurate results across the board. Whiles were still ever-so-slightly cool but they are now about 5 units cool, meanwhile, the average deltaE dropped to 4.

We'd personally prefer the more accurate "warm" setting to be able to color-correct images on the go. You can really fine tune the display's temperature to your liking by choosing a point on the color sphere.

Disclaimer : We tested battery life on a non-retail European version of the View 10 in the United States on T-Mobile, so a possible network incompatibility can severely affect standby times. We shall update the battery test results once we can test a European unit at our office or once we can get our hands on an American variant in the US.

The Honor View 10 is powered by a large 3,750 mAh battery, which is rechargeable using Huawei's Super Charge adapter. Although the View 10 has internals very similar to the Mate 10 Pro's, it didn't score very close to what we expected.

It could be a combination of the fact that the unit we tested was a European model on an American carrier: T-Mobile. The results we got weren't terrible, but we think they could have been better with such a large battery. Either that, or the display that Honor went with is pretty inefficient.

Once we do get a fully compatible unit, we'll retest and update the scores accordingly.

Huawei's Super Charge adapter charges the phone from a dead battery to 50% in 30 minutes and it never fails to impress us. The only downside is you need to use the included cable to take advantage of the full charging current of 22.5W (5V @ 4.5A). The phone warms a bit while charging, but never too much.

EMUI has always been a great Android skin for managing battery life. The Mate 10 Pro has simplified things for battery management significantly since the days of EMUI 4.0. EMUI will notify you when it detects that an app is using a lot of power and you can go into the battery settings to address that app accordingly.

Loudspeaker gets the job done

The Honor View 10 features a single bottom-facing loudspeaker next to its USB-C charging port. In our tests, the loudspeaker scored an overall rating of Good. The Honor 9 that came last year scored just marginally better. While the trebles and higher tones like ringers and notification sounds are plenty loud, mids and lows like spoken word or percussion weren't as strong.

Updated 05 Feb: We've identified an issue with our test unit and redid it. The text below has been updated to reflect the final performance.

The Huawei View 10 had excellent readings in the active external amplifier part of our test. Loud and free of distortion accurate its output is as good as they come.

Headphones introduced an average amount of stereo crosstalk, but overall it's still a solid performance. Loudness stayed high, too, so there's really little to complain about here.