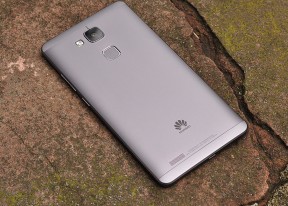 Huawei introduced three new smartphones at the IFA 2014 fair - the Ascend Mate7, Ascend G7 and the Ascend P7 Sapphire Edition with a sapphire screen and ceramic back.

The Huawei Ascend Mate7 is a pretty big device but is packed with all the rage of modern technology. On the front there's a 6" 1080p display, an octa-core processor, 13MP/5MP camera duo for back and front and comes with Huawei's EMUI (Emotion UI) v3.0.

The Huawei Ascend G7 is more of a midrange offering. It stacks up against the competition with a 5.5-incher of 720p resolution, a Cortex-A53 processor with four 1.2GHz cores and a 13MP/5MP combo of cameras.

It will cost €299 when it makes it to retail stores.

After the break you'll find our hands-on with both devices including a lot of pictures.

My G7 does not allow to download some App

My Huawei g7-l01....flash light is not working...what is the problem now

My Huawei G7.. Now goes off n on it by itself