Last week Huawei offered-up some extra detail on the latest EMUI 10.1 software and the first phones to get it. As some of might remember, this updated version made its official debut on the new P40 lineup, and you can read more about in out Huawei P40 Pro review. Among those to receive the upgrade will be the Mate 30 and P30 families as well as the Mate X.

Delivering on said promise Mate 30 Pro users in China can now participate in the first public beta of EMUI 10.1. The source is a bit short on details, but the first package, confirmed to be available to Mate 30 Pro users, bears the 10.1.0.119 number and weighs about 442MB.

As expected, this build doesn't include all new EMUI additions, as detailed by Huawei. What is already there, at least in an early form, includes new fingerprint scanning animations. You can check those in motion here.

Also, the new side bar is there as a part of a new Multi-Window functionality and is meant to facilitate quicker app launching. Unfortunately, the screenshots don’t show the actual multi-window part in action.

No word on the revamped Huawei MeeTime messenger and collaboration tool, or the new Celia AI assistant. Granted, both of these seem to be geared towards a more Western audience in Huawei’s current EMUI expansion plan. Hence, we can probably expect to see more detain on them once EMUI 10.1 starts hitting devices in Europe. 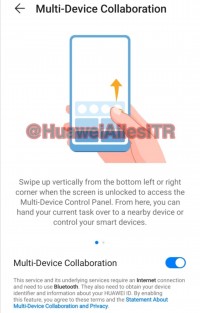 Unfortunately, we don’t have any timeframe on that either. Hopefully, there will be an open beta test on the Old Continent as well.

Sure I'll be waiting

What about the mate 10 pro