Someone got a Huawei Mate 30 Pro unit early. The white plastic is used to hide the design, but it doesn’t do a very good job – the thing to notice here is the curvature of the screen and the new notch hardware. 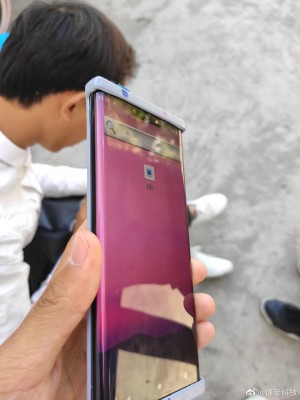 The Mate 30 Pro has what the Internet has been calling a “waterfall screen”, the left and right side curve 90°, much more than a typical screen with curved sides. Perhaps, EMUI will use these for gestures or other tricks (remember when the Galaxy Edge emulated a side-mounted shutter button?). Good palm rejection is a must, however.

The notch has been redesigned with second generation Face Recognition hardware. It looks like a triple camera, but it may actually be a Time of Flight (ToF) system with a light emitter and sensor. For comparison, here’s what the Mate 20 Pro 3D scanner looks like – it’s based on a different system called structured light. 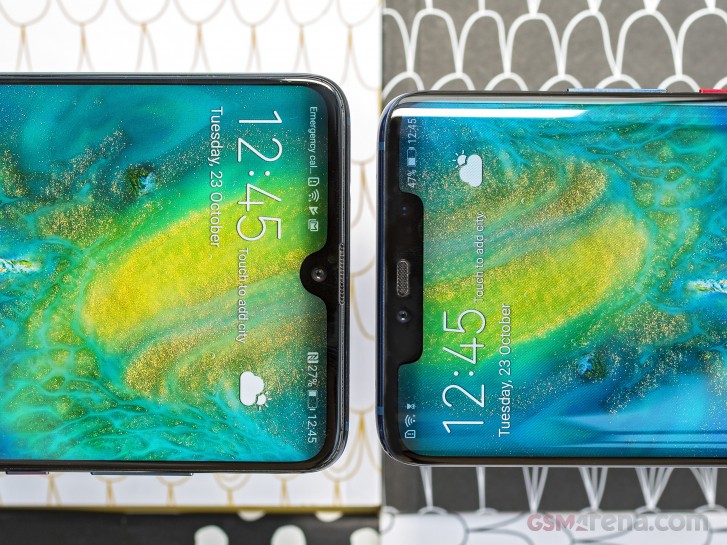 We’ve already seen the front panel of the Huawei Mate 30. It’s narrower and has only two visible lenses – whether it’s a dual cam or something else, it’s a different system than what the Pro got. That was the deal last year too – the Mate 20 Pro had 3D face recognition, the vanilla model had a small teardrop notch.

Based on the rumors so far, the Huawei Mate 30 Pro will have a 6.6-6.7” screen with 90Hz refresh rate and QHD resolution. The selfie camera setup is unknown, though the face unlock is rumored to be next generation (which the photo above seems to confirm).

As for the rear cameras, Huawei is reportedly preparing two large 40MP sensors to go with the 8MP telephoto shooter. From what we’ve seen of leaked cases and renders, the Mate 30 Pro will also have a 3D ToF sensor on the back, the vanilla model will not.

Huawei will officially unveil the both Mate flagships on September 19 in Munich.

And for when a sound upgrade for real Dolby with 2 speakers? For me its the great disappointment from the leaks we have so far (lets wait for playstore) to see that S10 an Note still have better sound (not comparing headphones).

lol that search bar is so ugly, does emui still have that 2010 android look?