Huawei is now officially on its third generation of foldable display phones with the Mate X2. We've seen major technological strides with these products since the original Mate X came out in 2019. The Mate X2, in particular, marks a whole new take on foldables for the Chinese giant - a move away from the outward-folding design on the Mate X and Mate Xs and on to an inward-folding paradigm, much like what Samsung pioneered with its Fold line. 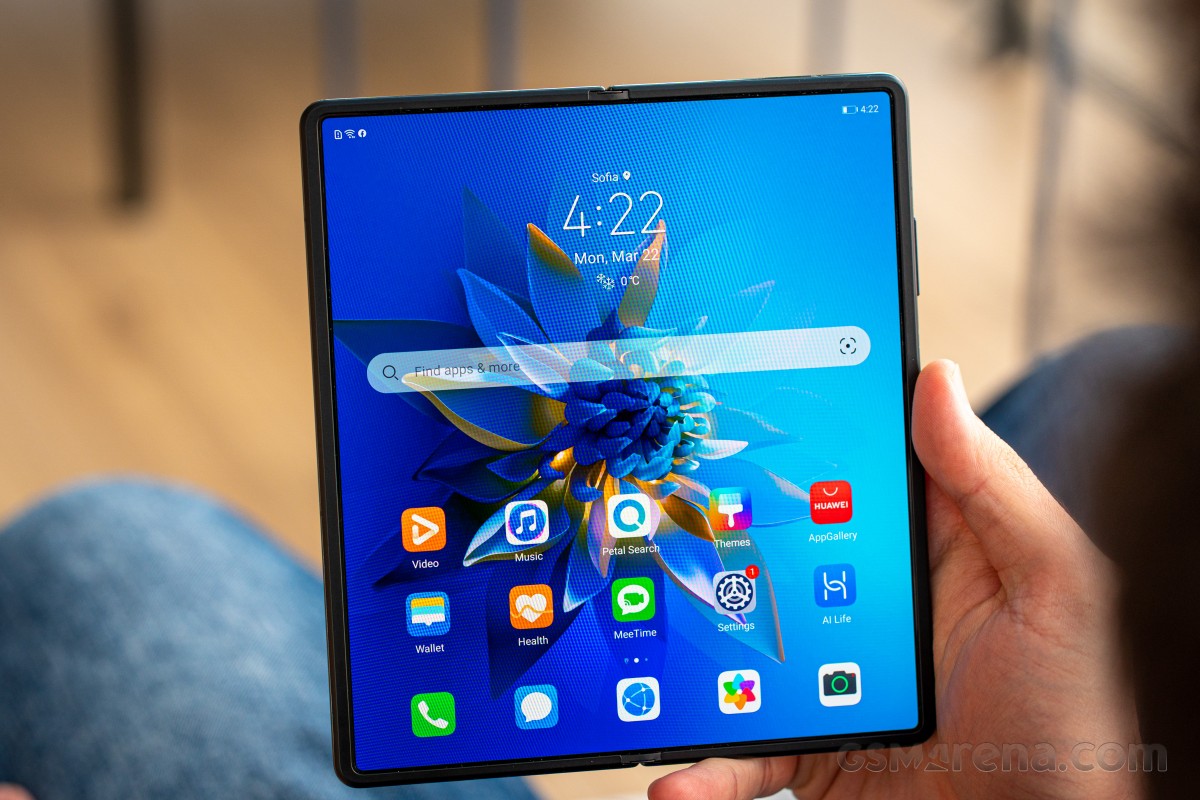 Well, if the inward fold is the form factor consumers prefer, now that we've seen the industry settle on this common design, we'll also probably see the tech mature faster and become more affordable in the process.

Unfortunately, the Mate X2 is not the foldable for the masses that many of us desire. Instead, it is still very much a halo device, meant to impress and showcase more than anything else. In fact, it might just be even more unattainable than its predecessors, seeing how it is currently only sold in China, with no official intention of expanding availability and that the still ongoing US sanctions mean no Google Play Services and severely handcapped chipset manufacturing capabilities. And this is all before we even start to consider the Mate X2's eye-watering price tag of around EUR 2300.

We felt like these are important points to make before we start drooling over the Mate X2's exquisite hardware. The Mate X2 is an amazing device, and here's a quick recap of its main specs.

As we already established, the phone we have for review today is a showcase device with limited availability and a ludicrous price tag. An extra word of warning - our device is also running a Chinese ROM. Of course, none of this is any reason not to explore its next-gen hardware, design and features.

The Huawei Mate X2 ships in a pretty huge and rather fancy box. It is thick all around and has a soft-touch finish. When opened, the magnetic flap at the top reveals the unfolded Mate X2 and its impressive, massive and uninterrupted internal display. All of the foldable display phones we have seen ship in an unfolded state, which justifies the bigger box size. 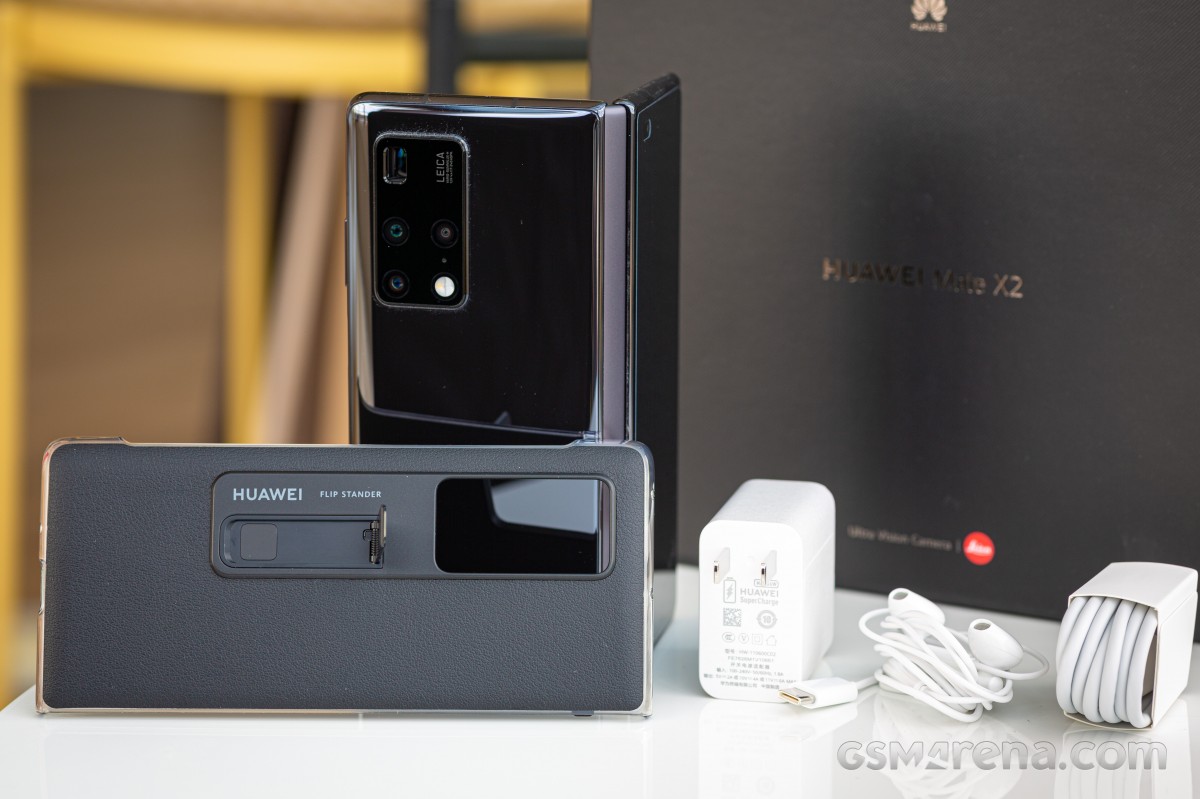 Huawei did not skimp on the accessory package either. You get a case in the box, or more accurately a "back cover" for lack of a better term, complete with a fancy magnetic kickstand and a leather finish.

While having any level of extra protection is better than nothing, we can't help but recall Samsung's official cases for the Fold line, which do include at least some sort of tiny bumper for the other half of the phone. Also, the official Mate Xs case, for that matter. We kind of wish this was the case with the Mate X2 as well.

The box also contains a pair of white, Type-C wired earbuds in the box. They have a microphone for calls, as well and the same inline control buttons. Beyond that, nothing too fancy. They sound decent, and the buds' Apple-like shape generally provides a lot of comfort without forcing themselves on the ear canals. 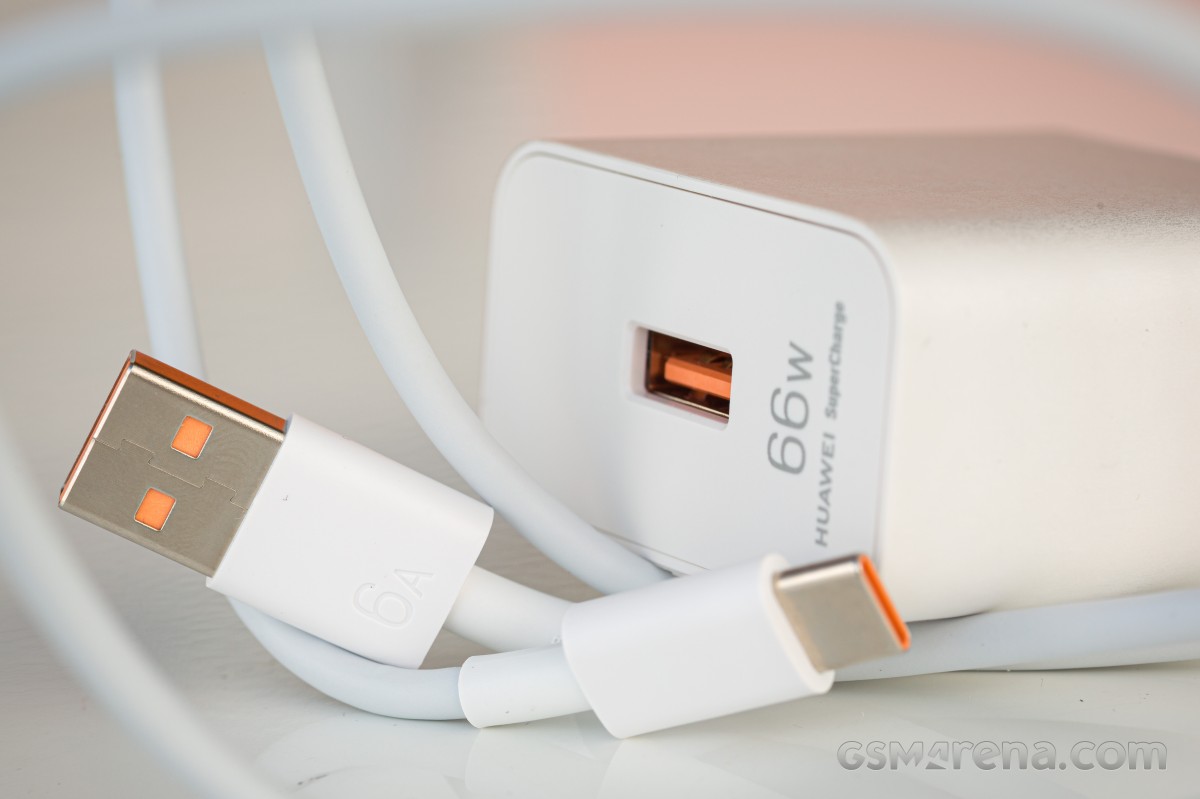 The charger bundled with the phone has a USB Type-A adapter is rated at 66W. It arrives with a special, heavy-duty 6A USB Type-A to Type-C cable. This is the same combo offered with the Mate 40 Pro and Mate 40 Pro+.

Besides the fact that you need to hold onto a proprietary cable, there is also the limitation that this is not a PD-compatible charger. Instead, it mostly caters to Huawei's own SuperCharge protocol. It is rated for the following power output modes 5V 2A (10 W), 9V2A(18 W), 10V2.25A(22.5 W), 10V4A(40 W) and 11V6A Max(66 W) and only supports SCP and Quick Charge 2.0 as a fallback. Since neither 10V, nor 11V is within the standard PD spec, the charger can't be used for quick charging other devices.

Looking back at our Mate Xs review, we know for a fact that Huawei shipped that phone with a much more versatile 65W PowerDelivery-compatible and SuperCharge-capable charger, alongside a standard 3.3A Type-C to Type-C cable. We see the new bundle as a downgrade for its lower versatility.

It should be noted that the Mate X2 supports a maximum of 55W of charging, just like the Mate X and Mate Xs, despite the higher-rated charger.

Based on my experience with Mate Xs , the screen was really solid , it had 2 layers of expensive polymer film that were protecting and holding it tight, in my opinion this is better than glass , yes scratches is always an issue with any plastic scre...

The mate x/xs was way better than anything samsung had made till then but the technology was not there yet. The screen folded outwards and was made from plastic, which meant it scratched easily and was not that durable. But as soon as foldable glass ...

Apart from the extra ram I can't see what are the pros of a Z fold from a hawardware point view. Possibly (and hopefully) Z fold 3 solves those, but until then Mate X2 is a no brainer (as long as you can find it that is, because -practicall...