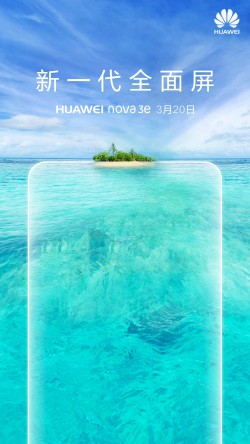 Exactly one week before its world premiere of the P20 family in Paris, Huawei is holding a different event in China. This will take place on March 20 and on that occasion the Huawei nova 3e will be announced for the domestic market. That's been made obvious by the event invite Huawei has sent Chinese media. You can see the invite to the left, and it spells out the phone's name very clearly.

The nova 3e has managed not to leak at all so far, which is intriguing. The lack of previous news about it might be due to the fact that it's just going to serve as the P20 Lite for the Chinese market. This is apparently what's now rumored regarding the nova 3e, and if this pans out then the fact that we haven't heard anything about it yet makes perfect sense.

That's because if feels like the P20 Lite has been leaking every day for a couple of weeks now. Also, Huawei has a propensity for launching the same device in different countries under different names. If the nova 3e is the P20 Lite in disguise, then expect it to possibly be powered by the new Kirin 670 mid-range chipset, with a neural processing unit of its own and a hexa-core CPU with two Cortex-A72 cores and four Cortex-A53 cores. It's made on the 12nm process, an improvement compared to the 16nm Kirin 659 it aims to replace.

On the other hand, the nova 3e is said to use a 5.6-inch 1080p+ tall display, a rear-mounted fingerprint sensor, a vertically-aligned dual rear camera setup, and a 3,350 mAh battery. That capacity and the screen's size don't line up with what we've heard about the P20 Lite, so perhaps these will be two different devices after all.

I have intended to purchase the phone as its looks & weight make me pleased. Can some one ensure me regarding its services specially battery life & speed?

Awesome Look and weight. superb fast. I just like it very much...