Huawei launched the nova 4 last December in China with 8 GB RAM and 128 GB storage, and almost three months later, the company has now launched a new variant of the phone with 6 GB RAM.

This 6 GB RAM retains the 128 GB of storage and is offered in four colors - Fritillaria White, Honey Red, Bright Black, and Blue. It is priced at CNY 2,799 ($417) and is currently only available in China. 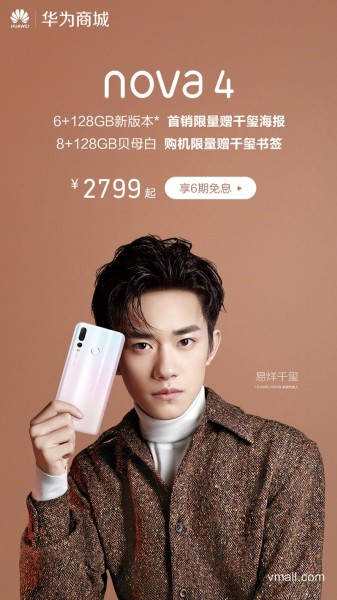 The Huawei nova 4 is powered by Kirin 970 SoC and is equipped with a 6.4-inch Full-HD+ display. The display has a hole in the top-left corner which accommodates the 25 MP camera. Round the back, the smartphone has a triple camera setup consisting of 48 MP, 16 MP, and 2 MP modules. There's also a variant called Standard Edition which replaces the 48 MP snapper with a 20 MP one.

Huawei is clearly turning into Samsung. Flooding the market with below average and crappy models until their reputation is shot to pieces. Fools. Not to mention that since 2016 they always lack something on their high-end models (just like Xia...