Huawei nova 8 SE will be unveiled on November 5

Huawei introduced the nova 7 SE back in April, and last month it launched the nova 7 SE 5G Youth. Today the company announced it will follow up with the nova 8 SE on November 5, which will be unveiled at 2PM local time in China.

Huawei's post on Weibo also includes a teaser, which confirms the nova 8 SE will pack four rear cameras and have iPhone 12-like flat frames, with the right one housing the volume rocker and power key. 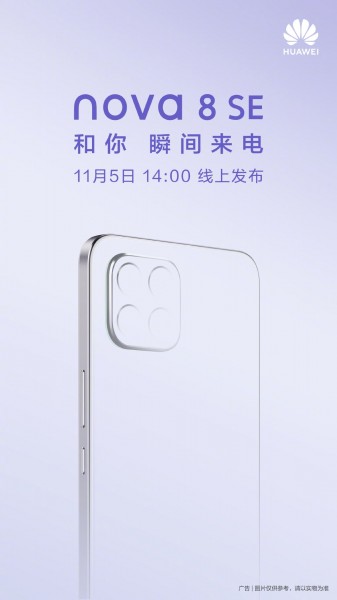 nova 8 SE is coming on November 5

A separate poster gives us a better look at the nova 8 SE while confirming its colors and a few specs, which include a 6.53" OLED screen, 64MP quad camera and 66W fast charging. 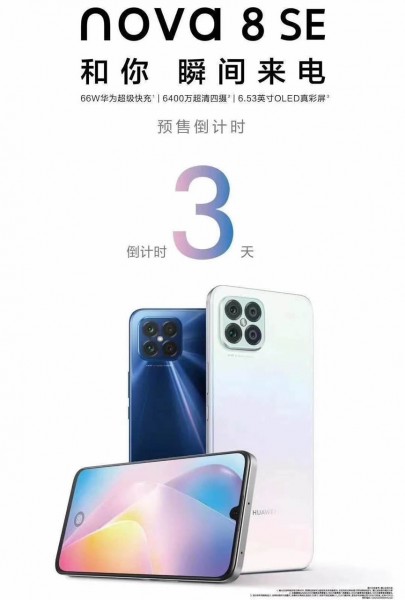 Huawei is yet to reveal the full specs sheet of the nova 8 SE, but rumors have it that the smartphone will pack a 60Hz FHD+ display and have two variants powered by two different chipsets - Dimensity 720 and Dimensity 800U.

The 64MP primary camera on the back will be joined by one 8MP and two 2MP units, and fueling the entire package will be a 3,800 mAh battery.

You guys made me cry😢. That's the right thing to do. 👌

We are all here to learn and i will always admit when i am wrong.

Wow. What a beautiful exchange. I'm used to reading people insulting each other on this comment section but you guys are something else.