Huawei held a presentation at its Shenzhen headquartes revealing its plans for the imminent future. "Premium" is the buzzword, and understandably so, as the recently published financial results indicate that mid- to high-end devices were key in the company's last-year growth. 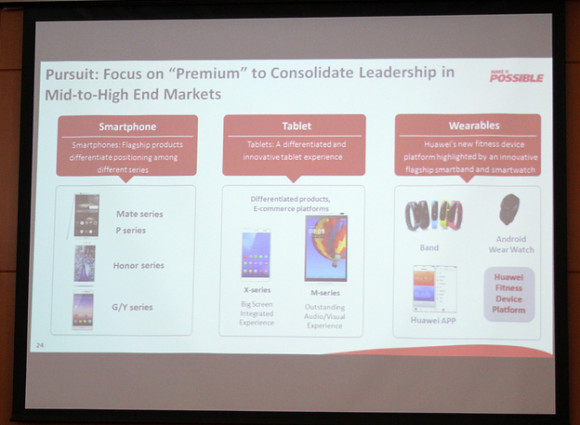 At the Mobile World Congress in Barcelona in March, Huawei is set to focus on Android wearables. The venue is selected to mark the company's foray into the smartwatch world. Lessons were learned during the yet brief existence of the niche, and consumers tend to favor a more conventional round shape. Such is Huawei's concept as well, as a prototype black body with a round face is pictured in the presentation. How close that image is to the actual device remains to be seen.

A smartband in a rainbow of fresh colors will also be unveiled, for the tech-savvy outdoor crowd. A dedicated Huawei app is in the works for easy monitoring of the feed of info coming from your wrists.

While no official info was revealed on the upcoming Huawei P8 flagship, the smartphone lineup is to remain unaltered. The Mate and P-series occupy the top with the Honor and G series spanning the midrange. The tablet lineup, on the other hand, will be expanded with the introduction of the M-series of devices, apparently in the larger tablet segment. Targeted at mobile multimedia gobblers, the series will offer "Outstanding Audio/Visual Experience", in Huawei's phrasing.

All in all, ambitious promises from the Chinese company. We're looking forward to the MWC to see whether they will start delivering.

is it dual Sim?

"Premium"=compromises in the name if design and image. Nah, thanks. Put removable batteries and i'll buy something like Mate 7