The Huawei P30 Lite is equipped with a 6.15-inch IPS display with a dewdrop notch in the middle. It matches the size and even the cutout of the P30's display, though the flagship one is of the OLED kind. Well, if we really need to be punctual, the Lite's display is a tiny little bit larger.

The Lite brings yet another tall screen with an aspect ratio of 19.5:9, which has become somewhat of a standard these days. The resolution is 2312x1080px that makes for a pixel density of 415ppi - pretty good numbers these days. 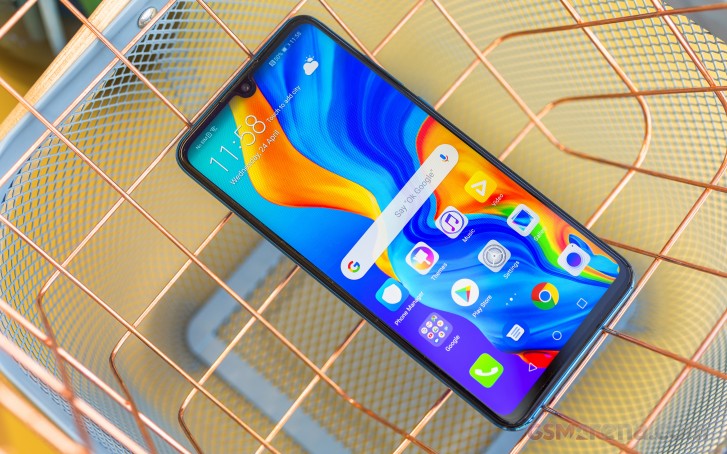 In our testing, the P30 Lite posted good numbers for brightness and contrast though we've seen better even in this class. There's a small boost in auto mode, adding 20-something nits over the ones you can get in manual.

The minimal brightness we measured turned out excellent at mere 1 nit.

Now let's talk color accuracy. The Huawei P30 Lite can be impressively accurate in representing the sRGB color space. In the Normal+Default display setting it achieves an average DeltaE of 1.4 with a maximum deviation of 2.8. If you want, you can tweak it even further with the manual options.

That's not the default mode, though, because people tend to prefer livelier colors. The Vivid+Default setting (the actual out-of-the-box state) delivers those, but it also renders quite bluish whites and over the top blues. The Vivid mode covers the DCI-P3 color space and we measured an average DeltaE of 6.3 with a maximum deviation of 11.7.

One issue we observed is the less than ideal backlight uniformity of the panel. On bright screens you'll be able to notice some dimming around the edges - it's not a deal breaker, but it's there. Also, looking at the display even at a slight angle is quick to introduce a contrast shift, but that may or may not bother you.

The Huawei P30 Lite packs a 3,340mAh battery, up from the 3,000mAh of last year's P20 Lite model. It does have a larger display area to light up, though, so the battery life score is not clear just by looking at the numbers.

The Kirin 710 chip is newer and more efficient, which eventually turned out for the better for the P30 Lite and it posted much better battery scores than the P20 Lite. This year's model showed vastly improved endurance in standby, 3G voice calls, and Wi-Fi web browsing, and it also benefitted from a slight increase in video playback longevity.

Overall, the Huawei P30 Lite Endurance rating works out to 94 hours - a tangible 17-hour improvement over the predecessor. 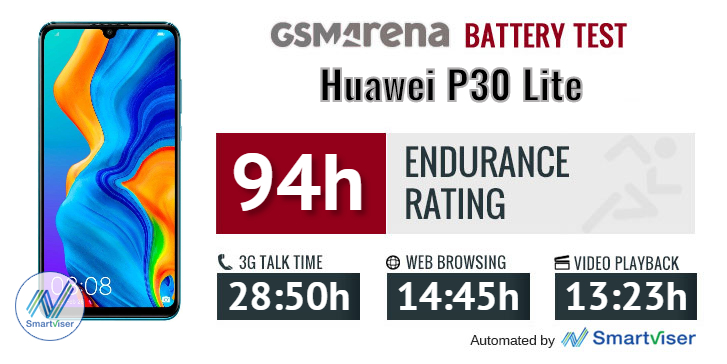 The P30 Lite supports 18W fast charging and the bundled charger replenishes 35% of a dead battery in half an hour.

Our battery tests were automated thanks to SmartViser, using its viSer App. The endurance rating above denotes how long a single battery charge will last you if you use the Huawei P30 Lite for an hour each of telephony, web browsing, and video playback daily. We've established this usage pattern so that our battery results are comparable across devices in the most common day-to-day tasks. The battery testing procedure is described in detail in case you're interested in the nitty-gritty. You can check out our complete battery test table, where you can see how all of the smartphones we've tested will compare under your own typical use.

The Huawei P30 Lite has a single bottom-firing speaker at its disposal, just like the Lites to come before it. A stereo setup might be out of the question, but the speaker can still put on a good show and scored an Excellent mark in our test. Unfortunately, when playing music over YouTube or the default Music player the speaker sounds noticeably quieter. Worse, the output is rather mediocre and lacks in the high and low frequencies.

The Huawei P30 lite had mostly excellent readings in the active external amplifier test, save for the stereo crosstalk, which was a bit higher than we are used to seeing from smartphones these days. Still, it’s nothing to lose sleep over as stereo quality remains solid. More troubling is the below average loudness, which is present both here and when we plugged in a pair of headphones.

On the upside, plugging in hеadphones did little damage to the accuracy of the output and it remained great. Whether the sub-par loudness will actually matter in your daily usage depends on the impedance of your headphones. If it’s not too high you should be very happy with the P30 lite, otherwise, you might find it struggling to keep up.