The Huawei P30 Pro is spearheading the smartphone camera evolution, just like the P20 Pro was, but instead of three there are now four sensors on the back. The P30 Pro contains every photography achievements Huawei has accomplished in the mobile segment so far and is the bearer of the latest Leica developments as well.

Three of the four cameras share a hump - the top one is the 20MP shooter with the ultra-wide angle f/2.2 lens, then comes the main 40MP camera with a wide-angle (or regular in phone terms) f/1.8 OIS lens, and finally you get the f/3.4 periscope telephoto OIS lens for 5x optical zoom and an 8MP sensor. The fourth camera is the ToF one, sitting flush next to the dual-tone LED flash. 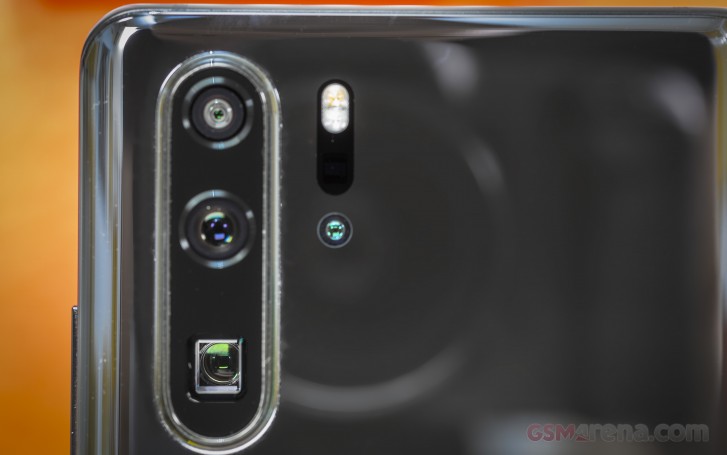 And now let's dig into the technicalities.

Main camera: The Huawei P30 Pro is equipped with a new 40MP sensor by Sony. They are calling it SuperSensing sensor. It will output 10MP photos by default due to the Quad-Bayer filter, but if you feel like it - you can still opt to save the 40MP image. If you are unfamiliar with Bayer and Quad-Bayer filters, you may want to check this article to know how they work, but the short version is this - they essentially function as 10MP sensors with very large pixels and some advanced functionality such as real time HDR.

While the 40MP SuperSensing sensor has the same resolution and 27mm lens as the main snappers on the P20 Pro and Mate 20 Pro, it's actually a brand-new sensor made by Sony exclusively for Huawei. The lens is now brighter at F/1.6 and optically stabilized which alone is a massive improvement over the previous generation.

Second the 40MP SuperSensing sensor has a new color filter. Instead of the traditional RGGB filter, Huawei and Sony have used a RYYB color filter on the sensor (where the green sub-pixels have been replaced by yellow ones). They say yellow allows them to collect up to 40% more light than the green filters in RGGB and this change should translate into better image quality, especially in low-light.

So to sum things up - the 40MP camera now has a brighter aperture, an optical stabilization system, and a new color filter - three things that should help massively improve its performance in low-light photography. And if that's not enough, Huawei's proprietary Night Mode is available as well.

Ultra-wide angle camera: The 20MP snapper with an f/2.2 16mm lens which we saw for the first time on the Mate 20 Pro has been carried over to the P30 Pro. It has phase-detection autofocus and also supports Super Macro Mode for photos from as close as 2.5cm. Huawei has improved its Night Mode to work better with the ultra-wide angle camera on the P30 Pro, though - it now takes up to 8 or 9 seconds to capture and the images are much better.

Telephoto camera: Without a doubt, the crown jewel of the Huawei P30 Pro is its telephoto camera. We've seen periscope cameras before but they were all zoom designs and not with very high image quality. This here is a proper stabilized prime lens and we expect it to deliver much better images.

But first, let's talk about this camera's sensor. It's still 8MP in resolution, but Huawei has opted for a bigger sensor and now its pixels are 1.22µm big - an update over the 1.0µm pixels on the 8MP telephoto snappers of the P20 Pro and Mate 20 Pro.

The sensor is placed perpendicuarly to the back about 1cm to the right of the camera hump. What you actually see when looking at the back is the periscope lens' front element. There are no mirrors involved here - the light is refracted at a 90-degree angle towards the sensor by a prism. 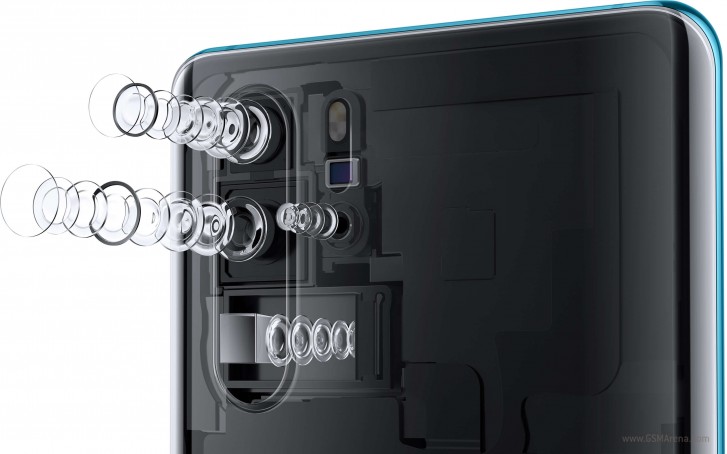 The refracted light passes through a set of 5 additional optical elements. The system also provides optical image stabilization, which is a must for long focal lengths where even small camera shake is multiplied.

What can be even more confusing is that the EXIF of the zoomed photos says 135mm, which corresponds to true 5x optical zoom. But Huawei has confirmed for us that 125mm is the correct number in 35mm terms, which means the actual zoom over the main camera is about 4.6x and not 5x. But for the sake of avoiding further confusion, we will stick to calling it 5x zoom from now on.

Huawei also does the so-called 10x hybrid zoom, combining digital and optical magnification. It's supposed to provide lossless digital zooming. In fact you can even go up to 50x digital zoom - this mode has dubious benefits for actual picture taking but we're sure it would allow you to have a clear look at something happening quite far away from you.

ToF camera: The fourth camera is outside the main setup next to the LED flash. It's a ToF (time of flight) camera and has two main objectives - to speed up the autofocus and thus replacing the laser assistance, but also because of its ability to deliver a depth map for the scen it should improve the subject separation and the background blur in portrait mode. As the ToF sensor offers better multi-layer mapping you get more accurate multi-level bokeh simulation.

Huawei likes to mark its zoom as 5x optical and 10x hybrid. You will find 5x and 10x options in its camera app, while the wide-angle camera is called 0.6x. Well, if we have to be technically correct, when you compare the focal lengths of the wide and tele ends (16-125mm in 35mm terms), we'd say the P30 Pro offers a 7.8x optical zoom as opposed to 5x. Of course, this is only about the wording and it should not concern regular users, but we just wanted to mention this to avoid any confusion. When presenting the camera samples, we will use the Huawei's convention for marking zoom steps. 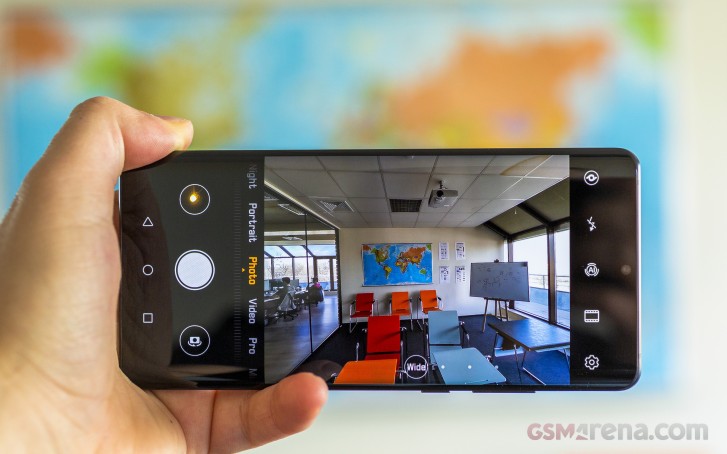 The camera app is enhanced by Huawei's AI just as before. There is an improved Master AI, which recognizes and tunes settings for up to 1,500 different scenes. Huawei has made it less aggressive, after the negative feedback they received for the P20 Pro where the Greenery and Blue Sky modes were over the top. We are happy with the presets used on the P30 Pro but if you'd like to keep the Master AI turned off, the switch is now sitting comfortably on your viewfinder, so you don't have to go through the settings.

The camera app itself hasn't changed much since the Mate 20 Pro. First off, you have a mode selector on the bottom. You swipe left or right to change modes, but you can't swipe on the viewfinder, just on the selector itself. Swiping up and down doesn't switch between front and rear camera either, you have a button for that (admittedly, it's at the bottom within easy reach). Basically, you're still wasting the viewfinder by not having gestures enabled on it, except for pinch to zoom.

As for zooming, a tap on the currently selected magnifaction indicator in the viewfinder toggles consecutively the 1x (25mm), 5x (125mm), 10x (250mm), and the 0.6x (16mm) magnifactions. The 10x mode is what Huawei refers to as hybrid zoom (essentially it's 2x digital zoom applied to the 5x optical camera).

Our experience is that you can get the same quality merely by cropping and upscaling a photo taken by the 5x camera. Of course, as with all digital zooming, the argument remains that doing it in the camera allows you to get better metering and appropriate exposure for the particular area you are interested in, which might not be possible if you merely crop and upsize photos with a wider field of view. 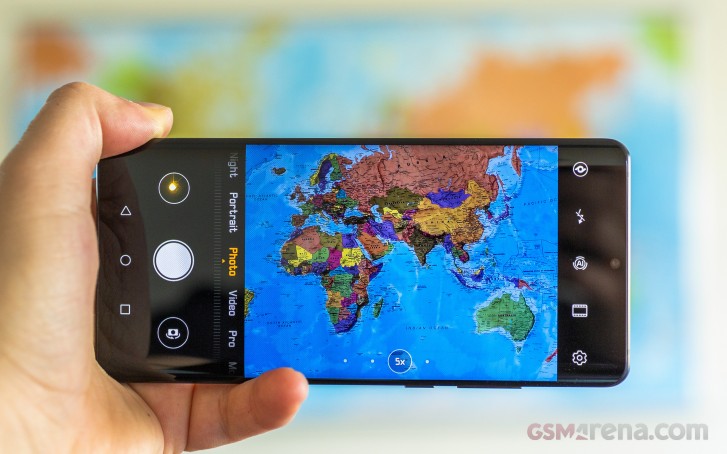 There's a Pro mode here where you can adjust parameters yourself - ISO (50 to 409,600), shutter speed (1/4000s to 30s), exposure compensation (-4 to +4EV in 1/3 stop increments), and white balance (presets and specific light temperature). You can also choose the metering mode (matrix, center-weighted and spot), and the focus mode (single, continuous and manual). If the phone thinks you messed up the exposure, an icon will pop up to warn you. 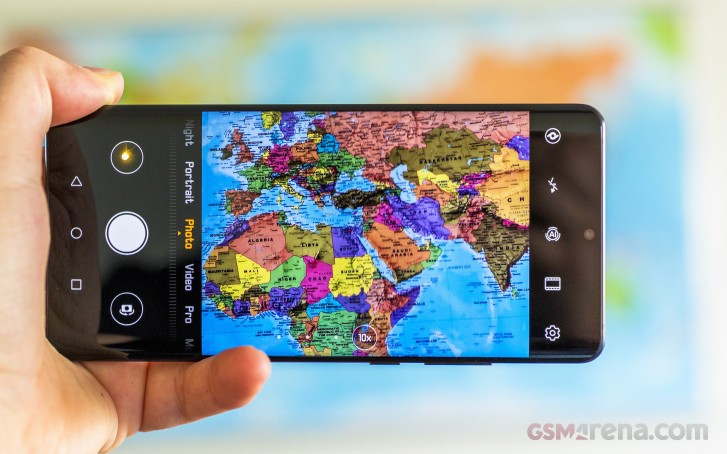 The monochrome mode is still available in spite of the P30 Pro not having a B&W camera. It's in the 'More' section, where the extra modes are: Monochrome, Panorama, and HDR, among others. The Super Macro mode is also here, and it has 1x and 0.6x toggles, too. If you choose 1x - the camera will just crop the image from the ultra-wide-angle source.

For years now, Huawei phones have had both a Portrait mode and an Aperture mode. There's now more differentiation than ever between the two. In Aperture, you can choose the simulated aperture in the range from f/0.95 to f/16. Post shot, you can change the aperture and the desired focus point within the Gallery.

In Portrait mode you can enable and disable the background blur, but you can also choose the bokeh shapes - circles, hearts, swirl or discs - those actually turned out nice. You can also opt for simulated lighting, and you can even add some beautification on a scale from 0 to 10.

Huawei is promising unmatched low-light videos on the P30 Pro due to the combined benefits of all the changes they've introduced to the camera system as well as the availability of super high ISO ceiling - the camera can push that up to ISO 409,600 compared to only ISO 102,400 on the P20 Pro.

There's super slow-mo recording as well, in what's become the industry-standard 720p/960fps, as well as 'regular' slow-mo in 720p/240 and 1080p/120fps. While the regular slow-mo clips are only limited in length by your free storage, the super slow-mo clips last precisely 10s - 6s of slow-mo and two seconds of regular speed action on both ends.

The video camera should also offer Dual View video down the line where you see the combined footage from two of the camera simultaneously on the video screen - for instance, the ultra-wide angle one and the normal one. The feature will not be available at launch but it planned to arrive as an OTA update.

Huawei is offering the so-called HiVision smart assistant as part of the camera app. It's basically a smart lens, which automatically recognizes landmarks, art, and food. Some of the smart functions include text translation and calories count, with the latter more of a gimmick as it's often comically off target.