Huawei will unveil the P40 flagships on March 26 but famed leakster Roland Quandt has already published a detailed rundown of what to expect in terms of specs and price.

In Europe, both the Huawei P40 and P40 Pro will use the Kirin 990 5G chipset and will feature 5G connectivity. Some regions will get LTE versions, however. Quandt's info covers the vanilla and Pro models, the rumored Premium version is not mentioned.

The Huawei P40 Pro will be available in White, Black, Gold and Silver

The rear camera will feature two modules with RYYB sensors. The first is a 50MP "UltraVision" camera with f/1.9 aperture and OIS, which will be primarily used for photos. There's an Octa Phase Detection system along with pixel binning. An AI-powered feature will capture images in a 1.7 second period and will automatically pick the "golden snap".

The other RYYB sensor will have 40MP resolution and will be used mainly for videos. The P40 Pro will be able to record 4K video with its rear and front cameras. The rear cam can boost its ISO to 51,200.

Then there's the SuperSensing zoom feature offering up to 50x hybrid zoom. This will use all cameras, but will mostly be based on the 12MP telephoto module. There are also a dedicated macro cam and a depth sensor on the back. 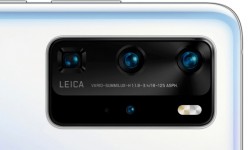 The Huawei P40 Pro will weigh 203g and will have a small-ish 4,200mAh battery with support for 40W SuperCharge. The phone will be dust and water resistant (IP68).

The Huawei P40 will be smaller and lighter than its Pro sibling. It will have a 6.1" OLED display with 1080p+ resolution (the refresh rate looks to be 60Hz). The selfie camera will skip the 3D sensor. 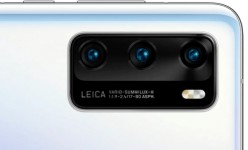 The rear camera setup will keep the 50MP UltraVision cam, but the telephoto cam goes down to an 8MP sensor (both modules will have OIS). There will also be an ultra wide shooter with a 16MP sensor.

The battery capacity is expected to be 3,800mAh and will only support 22.5W fast charging (same as the P30 last year). There's no dust and water resistance and no additional cooling (the Pro's chipset will dump its heat in the graphene-based SuperCool system).

The Huawei P40 will come in White, Gold, Silver and Black

The Huawei P40 will have only one memory configuration - 8GB of RAM and 128GB storage. The P40 Pro will have a 256GB option.

Quandt reports that they will use a new memory card standard - NanoMemory-2. It's not clear if older cards will be supported or what is the advantage of the new standard.

The two phones will launch with Android 10 and will rely on Huawei's AppGallery for app and game downloads (and other app stores, of course).

Complete dissapointment of P40 comoaring with S20, S20 provides much nmbetter value when P40, dust and water protection, better screen and battery. P40 Pro does not offer no value agaisnt s20+ either

Just realised that even if the main lens is F1.9 then they will still write it 1.8-3.4 because the ultra wide lens is F1.8. Now I feel stupid.

Definitely hoping to see the Mate 30 Pro photo quality with the new P40 phones. The level of work Huawei did to finally eliminate that horrendous waterpainting-like oversharpening effect like in older P or Mate phones made the Mate 30 Pro my absolute...