A photo of what is allegedly a piece of the Huawei P40's camera assembly, taken at a production line, gives us a glimpse of what the company's 'base' flagship for the Spring season may pack in terms of hardware. 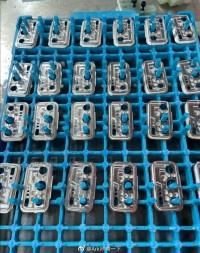 We're looking at a total of three cameras - the three circular cutouts. None of them will be a periscope telephoto, apparently, as such designs have rectangular openings. That feature seems to be reserved for the Pro version, as was the case with the P30 and P30 Pro.

More cutouts in the camera housing mean the dual LED flash and the laser emitter and receiver combo that were outside the cluster on the last generation will now move in with the actual camera modules. With all of them under the same roof, the complete assembly will look similar to the one on the Honor V30 Pro.

While we can speculate to a certain degree of certainty as to the number of the modules - if the P30 had three, the P40 isn't going to have fewer, and it's not going to have more than three judging by the cutouts either, a piece of milled metal isn't very telling as to the cameras' specs. There's still some waiting until we get those.

Except Huawei learn from the mistakes of others.

Yeah, i know, like Windows Mobile. And this was a Microsoft product, not a chinese crap. Like Bada, Meego, i know