The P9 box is rather big, but houses just the necessities - a 5V/2A wall plug, a USB Type-C cable, and a pair of EarPod-like headphones with a remote. We appreciate the nice packaging - it surely feels premium.

If you want to rapid (quick) charge your battery, you will have to purchase Huawei's original Quick Charger 9V/2A for about $20.

The contents of the Huawei P9's retail box

Huawei has upped the attention to detail to a new high with the P9 flagship. There are two flavors of the P9 - the ceramic white, and the metal one made of aerospace-class aluminum. 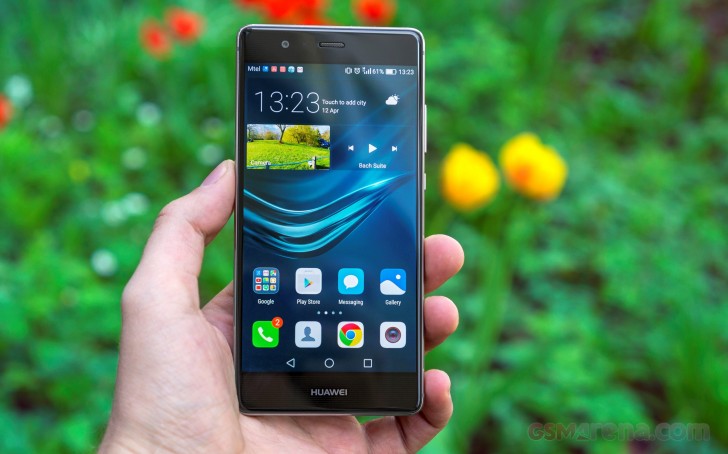 The ceramic white edition, obviously, has a ceramic unibody, which is highly glossy but far from slippery. The white flavor is not prone to fingerprints and smudges, but that's not the best part of it. Huawei claims the ceramic is "smoother than the painted bodywork of premium cars." It bends light to create an ever-changing show of color as ambient light changes and we can confirm the effect is nothing short of stunning.

Unfortunately, we handled the ceramic version only at the announcement event and we can't show you any pictures for now.

There is another flavor, made of brushed hairline aluminum, only available in Haze Gold paintjob. It has a very similar feel of the HTC One M9, which was also made of brushed aluminum.

And we have the aluminum model with sandblast finish, Titanium Grey paintjob, and it's equally beautiful. The other available color options for the sandblasted models are Prestige Gold, Rose Gold, and Mystic Silver.

So, our Huawei P9 is clothed in 2.5D glass and aerospace-class aluminum. The industrial design is continuation of the P-series while its sandblasted finish makes for a rather premium matte look, secure grip, and is very pleasant to touch.

The metal frame is part of the chassis but is accented with chamfered edges all the way on both sides.

You have probably noticed the two plastic strips on the back - currently that's the solution to cover the antenna bands, and the P9 has three of those (antennas not strips) to make sure death grips never happen.

The top plastic strip is rather insignificant though, as it is mostly hidden under the luxurious camera plating. For the titanium gray model, the panel is made of black glass with discreet gray line pattern. It's an excellent accent on the dual 12MP snappers and the Leica logo sits great on the opposite side.

The Huawei P9 is one of the most beautiful smartphones we've handled lately, and is a pleasure to work and shoot with. It's slim and lightweight but of a sturdy and solid build, and thanks to the sandblasted finish the grip is very secure.

The Huawei P9 next to the Galaxy S7

Finally, the P9 is compact enough and easy to operate with just one hand. Your index finger should fall perfectly on the rear-mounted fingerprint scanner. The sensor is always-on and unlocks the P9 immediately upon touch, no need to wake it up first. It's rated as Level 4 of fingerprint recognition security, which makes it one of the most secure scanners available on a phone.

Above the 5.2" display is the earpiece which has an embedded notification light underneath and you can see it only when active. The 8MP selfie shooter and a couple of sensors are also around.

There is nothing but the Huawei logo below the screen.

A peek above the display • The earpiece

The left side has the SIM/SD tray which requires a small pin to pop out. It could either house a nano-SIM and a microSD card, or two nano-SIM cards if you got the dual-SIM P9 flavor. This model uses a hybrid slot, so you can choose to either have a microSD or a second SIM.

The metal volume rocker and power/lock key are on the right.

The top of the phone has nothing but the secondary mic. The bottom is pretty crowded though - here are the USB Type-C port, the loudspeaker grille, the primary mic, and the audio jack.

The top side • the bottom • the USB Type-C port

The Huawei P9 features two 12MP sensors on the back, one is fairly standard and captures color photographs while the other is monochrome (black&white). Leica designed three modes - Standard, Vivid Colors and Smooth Color, which promise to recreate the Leica film camera experience. We'll talk about this later on.

The camera setup is completed with a dual-tone LED flash and the laser AF hidden beneath.

The back of the Huawei P9 • the Leica camera setup