Huawei P9 Max may have been spotted in a benchmark rocking a 6.9-inch screen

Huawei has already introduced three members of the P9 family, the 'vanilla' P9, the P9 Plus, and the P9 Lite. However, there may actually be a fourth one coming soon, a P9 Max to act as the successor to the P8max from last year.

As such, you'd expect it to sport a huge touchscreen, and if the unknown Huawei device spotted in the GFXBench database actually turns out to be the P9 Max, then it definitely won't disappoint. 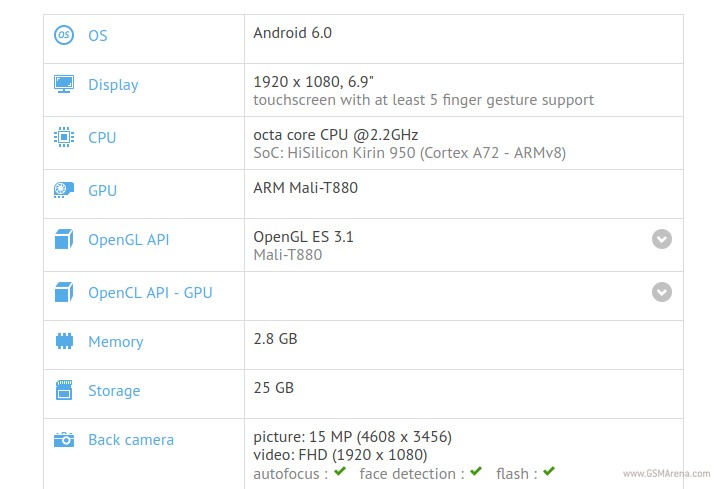 The chipset that this phablet employs is Huawei's own HiSilicon Kirin 950, first seen on the Mate 8. Interestingly though, it's not the newer Kirin 955 that's inside the P9 and P9 Plus. So the P9 Max, if this is it, and if it ever becomes official, will be just a tad lower-end than those two devices. For what it's worth, it still trumps the P9 Lite in terms of specs.

Are these specs true? I read on many other sites that the P9 Max screen size had been reduced to a very disappointing 6.2 inches so I scratched it off my wish list. I already own a P8 Max which i'm very happy with and I was looking forward to buyi...

Sorry bro but 99% of windows apps are junk... think android in 2010 or so. Windows mobile died long ago ...shame but true

Remember that there is a limit for your hand. Man i'm using C5 Ultra .... 6.0" too :) but still I can keep the Lenovo Phab Plus in my hand for a long time without any problem but I can't do the same with (Huawei MediaPad X1) Lenovo Phab Plus ...