Huawei reveals the nova 6 5G in a new video teaser

Huawei is launching the nova 6 lineup on December 5, less than six months after the arrival of the nova 5 family. We’ve seen the phone leak with a punch hole in its display hosting dual shooters and a camera setup that hasn’t had a major overhaul, but now the company released an official teaser, giving us a far clearer look at the actual front and back panels.

We can clearly see a triple camera setup, complemented by an LED flash, all lined up vertically. On the side, there is a tiny sensor, likely for a macro camera and what might be laser AF. Although Huawei is pushing a new, nova-inspired, design on the back panel, we can see that this device will also have a white glossy option with no letters on the panel.

Sadly, the Huawei nova 6 (or at least one of the phones from the nova 6 family) will miss on the 3.5 audio jack. The fingerprint scanner will be mounted on the power button on the side, while pn the bottom, the USB-C will have a speaker grille on one side, with the SIM tray on the other. 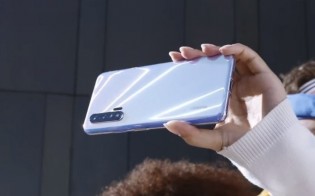 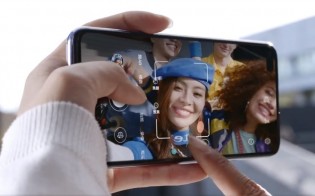 Huawei nova 6 5G front and back

We are expecting a wide-angle selfie camera with 105-degree FoV, which should be enough to get everyone in the shot.

The official launch is in two weeks and that’s when we’ll see how many nova 6 phones will arrive and what will be the full name of the device, seen in the video.

except that the camera was not covered in the first place dumdum. look at the other corner, you can see the punch hole camera there near or on the other woman's hair.