Huawei has sent us an invite to its event that will take place on September 4 in Berlin, on the eve of the IFA trade show.

As you can see below, it's not the most descriptive of invites. We should apparently witness an "exciting announcement", but neither the text, nor the image give us any indication of what will be presented there. 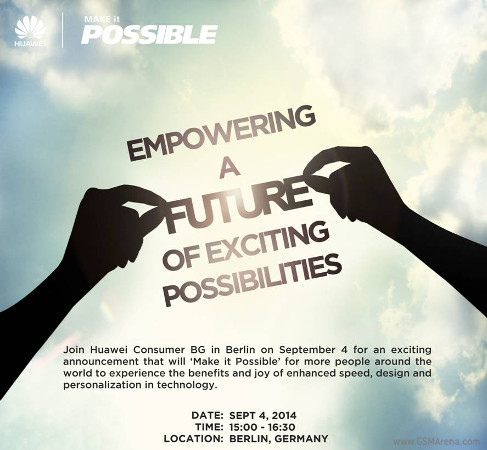 That said, a rumor from a couple of days ago claimed that the company would out the Ascend Mate 3 in September, and IFA could be the perfect venue for such an unveiling. Anyway, if this is what will be announced, expect the Ascend Mate 3 to star in many more leaks over the coming weeks.

In China, Huawei is set to release yet another Honor-branded smartphone. The latest we've seen so far in the series is the Honor 6, which got official in June.

Now though Huawei wants you to guess how much the upcoming Honor will cost (in yuan, of course). The price is a three digit number, and the last two are given to you: they're both nines. What the first digit will be is hence what you're left to figure out. If Huawei wants this new Honor device to stand a chance against Xiaomi, then that first digit should be as low as possible.

The mystery handset could be the one sporting the model number Hol-T00, which incidentally got certified for sale on the Chinese market last week.

This phone comes with a 5-inch touchscreen with 720p resolution, a MediaTek MT6582 chipset with a 1.3 GHz quad-core Cortex-A7 CPU, and 1GB of RAM. Interestingly, the rear camera is a 2 MP unit, so clearly this is shaping up to be the lowest-end Honor device yet.

With the specs announced it should be 099 if it is to stand a chance.