Huawei has announced that its P8max smartphone, which was unveiled back in April this year, will carry a price tag of 3,788 Chinese Yuan ($610). As for its release, a teaser (see image below) of the device reveals a date of June 26. 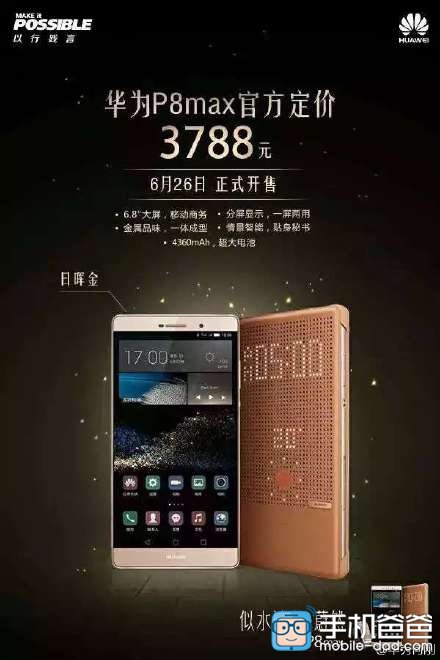 Specs-wise, the device is powered by a HiSilicon Kirin 935 chipset with a 64-bit octa-core processor running at up to 2.2GHz, and sports a massive 6.8-inch display with 1080 x 1920 resolution. It comes with 3GB RAM and 64GB internal memory, and packs in a huge 4360mAh battery.

In terms of camera, the P8max features a 13MP rear unit and a 5MP front shooter. It runs Android Lollipop v5.0.2 out-of-the-box.

In addition, the Chinese company also announced that it shipped a total of 50 million handsets in the first half of the ongoing year, up an impressive 46% from the last year's H1 shipments of 34.27 million units.

When will this phablet be available for sale in India? And is the China variant of phone compatible on 4G bands in India?

seems you never had huawei smartphone before????Am I ryt? coz people who used huawei smartphone wont give such comments? About the UI maybe you didnt know that it customizable? and Im confident to say that huawei has the best UI to date. If you use h...