Huawei has saved its best for the last and has not tried to steal the show at the crowded MWC 2015. The company is preparing to launch its new P8 flagship on April 15. 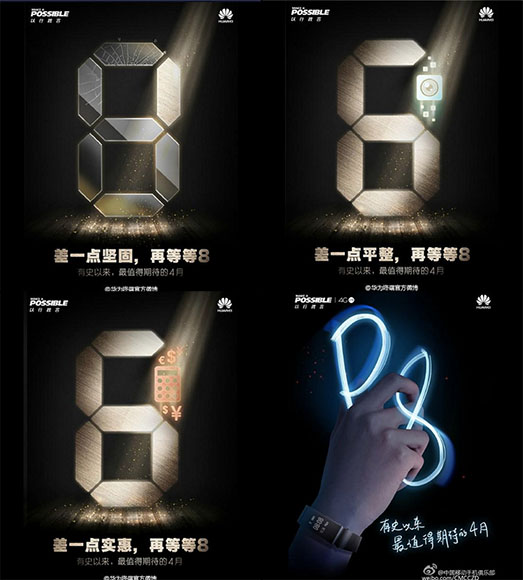 After the first teaser image about the battery, more have followed on Huawei’s official account on Weibo.

Craving a digital imagery pointing at the numerical eight, the three teaser images point stronger screen and a better camera. Third image points at a possible surprise at the price point.

So far the rumors have pointed that the Huawei P8 will features 5.2-inch Full HD display and ceramic unibody chassis. Powered by the Kirin 930 mobile chipset, the P8 will feature 3 GB RAM. The smartphone is expected to have a 13MP camera at the back too.

We shall wait for April 15 to have the details formally confirmed by Huawei.

Exactly my point..if anyone doesn't know about 950 they will feel good about the 930..so manufacturers should hide their future innovations properly so as to capitalize on their present products.. Its all about the feel good factor.

same price range??!! LoL u have no idead at all, p6's price is even less than half of an 1phone 6 16gb, get the fact right before post

These Huawei guys should stick to Telecom networking.