Huawei teases a new device ahead of CES

Ahead of its pre-CES event, Huawei has posted a teaser on its official Weibo account that contains a side image of a thin metal device with words "Rhythm x Entertainment," over it. As per reports, it could be the Honor X3 tablet. 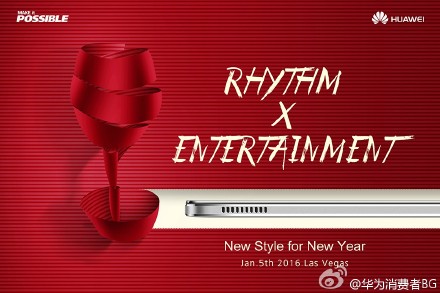 As for the specs, previous leaks have suggested that the Honor X3 will be powered by a Kirin 950 SoC and sport a 6.2-inch (1600 x 2560 pixel resolution) display. It will have 4GB RAM and 64GB internal memory. In terms of camera, the tablet is said to feature a 20MP rear unit and an 8MP front shooter. It will run Android 6.0 Marshmallow OS out-of-the-box.

Needless to say, none of this has been officially confirmed. However, the wait isn't too long as the teased device will be made official tomorrow.

How to distinguish if the gadget is a tablet or a phablet?

It must not be honor‘s product,wait and see.

Nice specs. 64 GB internal memory is really commendable. This device is head on to Samsung A9, provided they price it right.