Alongside the new Mate 30 series, Huawei introduced its latest smartwatch - the Watch GT2. It offers a round watch face with slimmer bezels compared to last year’s model and up to two weeks of battery life thanks to the new Kirin A1 SoC. The Watch GT 2 will be available in 42mm and 46mm sizes both of which come with a 1.39-inch always-on OLED display. The Kirin A1 chipset is at the helm of the new Watch GT 2 delivering low power consumption and a more stable Bluetooth connection, which Huawei claims can hold up to 150 meters away from your phone.

The 42mm version comes with 16MB RAM and 4GB storage while the 46mm bumps up the RAM to 32MB. That may not sound like a lot but the smartwatch actually runs Huawei’s Lite OS, which is hardly very demanding. It does still support both Android and iOS phones though.

We're bringing you more choice with the #HUAWEIWATCHGT2 so you can change it up daily.

It's time to #ExploreMore pic.twitter.com/v3rsXifJ42

The Watch GT 2 packs Bluetooth 5.1, a heart rate sensor, GPS as well as a gyroscope. The larger 46mm version also comes with a microphone and speaker. As far as fitness tracking, the watch supports up to 15 workout modes and can now track your heart rate underwater. In addition, there is also a revamped sleep tracking functionality thanks to Huawei TruSleep 2.0. 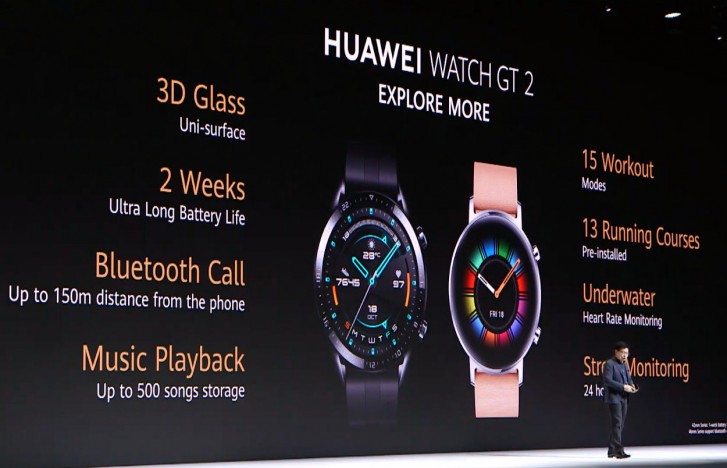 According to Huawei, the new Watch GT 2 can last 14 days with typical use and 30 hours in GPS mode. The 42mm version comes with a 215 mAh battery, while the 46mm variant packs a 455 mAh cell.

The Kirin A1 chipset is show that Qualcomm is doing bad with the CPU for Android Wear. Qualcomm should release the 7nm chipset for android wear.

It does have VO2 max, performance levels, recovery times and running heart zones,

Wanting runners to buy a watch that does not support Strava is like asking people who do not drink water to buy water bottles.