Huawei pretty much went all out at the Mate 20 announcement event. Not only did the Mate 20 and Mate 20 Pro make a first appearance, but so did the extravagant Mate 20X and the Mate 20 Porsche Design. The Huawei Watch GT and Band 3 Pro were kind of the icing on the cake. Now, we'll be the first to admit that Mate 20 family stirred up its share of controversy. Most-notably the new NM storage cards. But there's no denying that the sheer amount of released premium hardware is impressive. 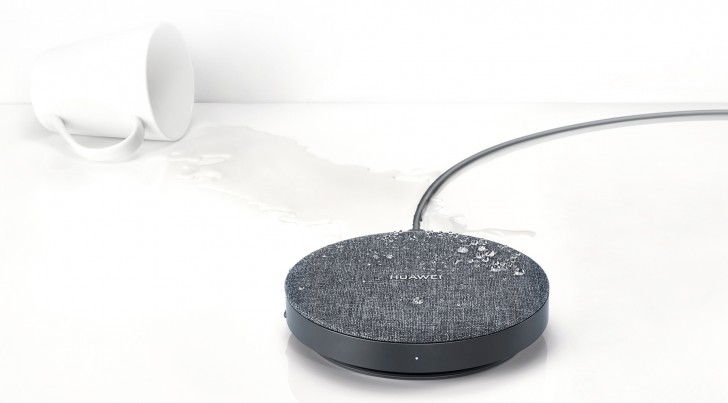 That being said, it appears that Huawei isn't done quite yet. Enter the "ST310-S1" - an interesting external backup hard drive solution, specifically designed to work with the new Mate 20 series. The round (136mm x 29mm, 270 gram), fabric-coated device looks like a wireless charger on the surface, but it actually houses a 1TB hard drive (other tiers might also be available) designed to automatically or manually backup data off your phone. It also doubles as a pass-through charger. You can connect a 5V2A, 9V2A Huawei fast charge or a 5V4.5A Huawei super fast charge adapter to it and have the juice pass to the handset, as well. Unfortunately, the new 40W SuperCharge standard seems to be notably absent from the list.

Other than that, this idea might just have some potential, since there are lots of reasons why one could want to back-up phone data locally. And doing so seamlessly, while charging sounds like a perfect setup. However, the real usefulness of such a device will definitely lie in the details, of which there are few at this time. For instance, if the automatic backup has the option to take an image of the phone's entire state, there are some interesting potential use cases to explore. A document and multimedia only approach to things is definitely less exciting. Plus, there is also the small matter of limited support (only the Mate 20 family). The product listing does, however, mention device support expansions planned for the future. Speaking of the listing - it comes from vmall and does not mention a price of the device. Instead, you can put CNY 8 down to save a spot in the first wave of sales and then get CNY 100 off the price of the device once the first batch becomes available on October 26. Seeing how that is just around the corner, we should know more about the charger/hard drive soon enough.

Unfortunately, it is not possible to backup the nm card too. It backups only the phone memory.

Can anyone confirm if it works with a generic charger?

I'd rather them have it than Google . Their government won't affect me .