Just yesterday we saw the upcoming Huawei Nexus 6 (codenamed Angler) in the database of the Geekbench benchmark for Android. That helpfully confirmed a couple of key specs of the device, namely the Snapdragon 810 chipset it uses, the fact that it comes with 3GB of RAM, and it runs Android 6.0 Marshmallow.

Today the same handset decided to run GFXBench too, and this benchmark's information screen thankfully lists even more specs for it. 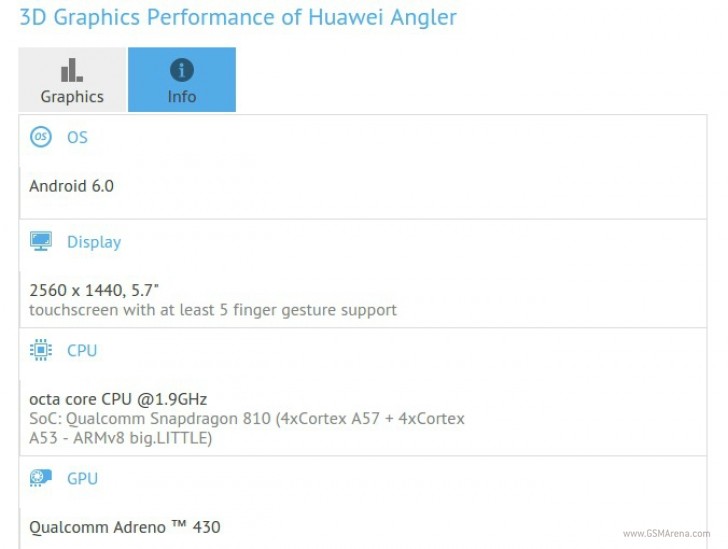 As such, we now know that Huawei's first Nexus smartphone will have a 5.7-inch QHD touchscreen, 32GB of storage, a 12 or 13 MP rear camera with 4K video capture support and LED flash, an 8 MP selfie shooter, an accelerometer, a barometer, a gyro, a compass, NFC, GPS, Bluetooth, Wi-Fi, as well as a pedometer.

The use of the Snapdragon 810 SoC paired with 3GB of RAM is confirmed yet again, so at this point the only big mystery remains the battery capacity of the Huawei Nexus 6.

Google is expected to announce this device alongside the LG Nexus 5X at an event on September 29. The two phones may then go up for pre-order on October 13.

It actually is. Even iPad Pro with A9X, which isn't really so mobile. It's quite a large device. There are a lot much more powerful devices with Core M and same size.

A 2800 geekbench score of the iPhone 6 is just midrange, when it comes to the GPU the iPhone is on the adreno 420 level but has a lower resolution than most Android phones. Actually, the strongest device out there in terms of gpu performance is the x...