Samsung has teased its upcoming Galaxy View tablet last month during its IFA event. This is going to be the company's biggest mobile device yet, as it's so far been rumored to sport a whopping 18.4-inch touchscreen. That is, if the Galaxy View turns out to be the tablet with the model number SM-T670.

Today the T670 was spotted at GFXBench, which means that its specs have once again been confirmed, through the benchmark's info listing. 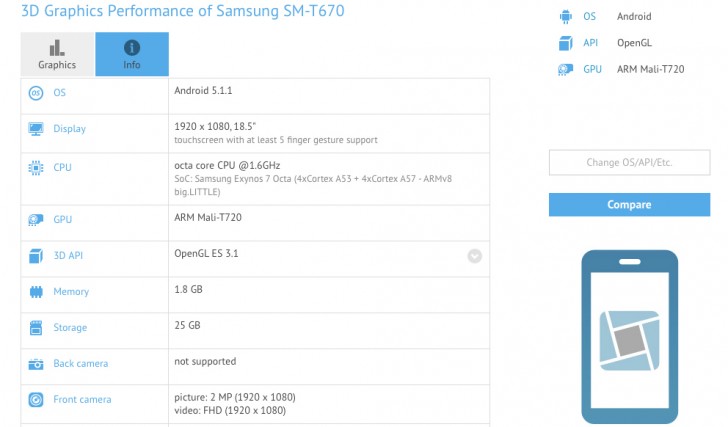 The device apparently has an 18.5-inch 1080p touchscreen, a 2 MP front camera, no rear camera, 2GB of RAM, 32GB of storage, Bluetooth, Wi-Fi, GPS, and it's powered by an unidentified Samsung Exynos 7 Octa chipset. This comes with a CPU sporting four Cortex-A57 cores and four Cortex-A53 cores, and the maximum clock speed seems to be 1.6 GHz. The GPU is a Mali-T720. The prototype that's been benchmarked was running Android 5.1.1 Lollipop at the time.

The lack of a rear camera seems surprising at first, but imagine how odd it would be to actually take pictures with an 18-inch tablet. The Galaxy View will allegedly be targeted at businesses and the education market, as well as consumers - in this case as a device for the living room. Since the Galaxy View has recently been Bluetooth certified, it should be announced soon.

The Samsung galaxy view isn't worth the money as it has no back camera and it's almost as heavy as a laptop the iPad pro however is a 12.9 inch Retina display and the Galaxy view is just an 18.5 inch tv and it was expected to be like the iPad pro but...