The Motorola RAZR HD name leaked a week ago though some EXIF data and now alleged photos of the actual device have hit the Internet. The phone in the photos is headed to China Mobile and carries the model number MT887.

The Motorola RAZR HD MT887 is an Android 4.0.3 Ice Cream Sandwich smartphone and lacks any hardware keys, opting for on-screen ones instead. The smaller bezel means a smaller phone compared to another China-bound RAZR with an HD screen - the MT917. 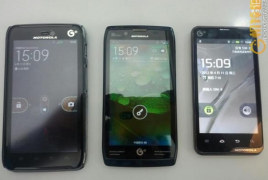 This could be due to a smaller screen size - 4.3" seems like a good guess, but 4.6" is mentioned in a couple of places. The camera on the back is reportedly an 8MP unit, which is inline with the EXIF info we saw.

Here are some further specs on the Motorola RAZR HD according to the rumor - TI OMAP 4430 chipset with dual-core 1.2GHz processor, 1GB RAM, 4GB storage, GSM and TD-SCDMA network connectivity. The phone is thicker than the 8.5mm thin XT917, which generates speculations that it packs a 3300mAh battery, a la RAZR MAXX.

Some leaked renders of the Motorola MT887 from earlier this week

There's another model number thrown around - MT889, which may be headed to China Telecom. There's no info on a world-wide version of the Motorola RAZR HD, but a Google-owned Motorola can't take too long to deliver an ICS phone, can it?

i hope atrix 3 come soon too

pleaseee do not buy ! COZ U DO NOT DESERVE IT . lol get samsung, sony etc