IDC: Android and iOS to stay on top by 2016, WP to progress slowly

The marketing intelligence and analysis company IDC has revisited its smartphone market predictions for the following four years. It's become quite a tradition for IDC to post different numbers in each report, which serves to show just how impossible task it is trying to achieve, predicting a market as dynamic as this one.

Nevertheless, the company suggests that Anrdoid will lose some of its market share and will slip from this year's 68.3% to 63.8% in 2016. IDC believes that despite the slide, Google's mobile OS will continue to be the market leader thanks to various low-end and mid-range offerings from LG, Sony, and Samsung. 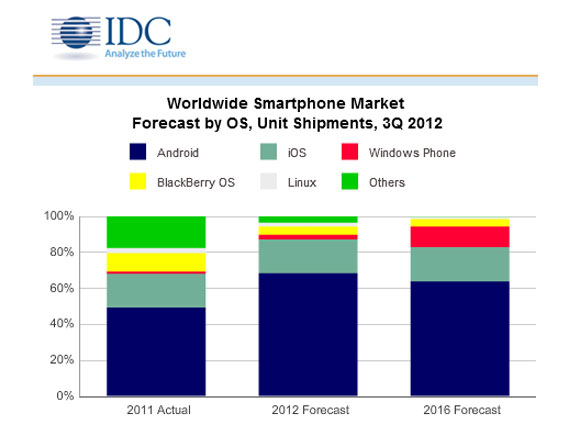 IDC's previous predictions that Windows Phone will overtake iOS by 2016 have been altered and now Microsoft's smartphone OS is predicted to take just 11.4% of the market (as opposed to 19.1% from six months ago). HTC and Nokia are going to drive the OS forward, but Samsung, ZTE and Huawei will also help grow Microsoft's share.

iOS on the other hand will continue to take second place in the heated mobile OS battle. The Apple platform held 18.8% of the market share in 2012 and according to IDC its share will remain relatively stable - 19.1% in 2016.

RIM will continue to fight for its survival and is betting all in on the soon-to-come BlackBerry 10 OS. IDC reckons RIM will be dependent on "channel advocacy" and "sales associates who can effectively tell the BlackBerry story". As a result, the company's 2016 market share is expected to stand at 4.1% from 4.7% in 2012.

Rather unsurprisingly, platforms with suspended development like MeeGo, Bada OS and Symbian will го virtually еxtinct by 2016 with an aggregated market share of 0.1%. However, up and rising mobile OSes like Samsung's Tizen and Jolla's SailFish which are based on Linux will still struggle to break ground. IDC predicts they'll manage to get 1.5% of the market share combined.

Ultimately, these predictions are bothering on pure speculations as seen before. An industry like the smartphone market is developing at fast rates and it's next to impossible to make such long term predictions accurately.

The quality of the operating system is a red herring. It only has to be good enough (some would say DOS and early Windows was not even that) What matters is the number of manufacturers and developers adopting the platform. On PCs that is what made Wi...

Windows phone sucks ! It was never a phone company, coz of apple they starred doing it. Android will sell as its cheap, Apple will sell at its best …. Windows will continue to suck…. just a horrible horrible product.