IDC posted a forecast for the development of the tablet market in 2016 and it expects a few major changes. According to it, traditional tablet shipments will decrease by 5.9% in 2016, as the form factor is pushed aside by 2-in-1 devices. 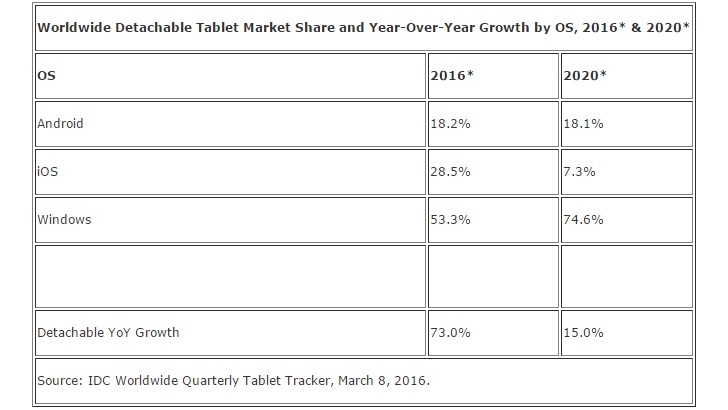 While the latter concept is definitely nothing new, it is seeing a major revival in recent months with new offers coming in from traditional players on the tablet market, as well as new ones, like Huawei and Alcatel bridging the gap.

The form factor makeс sense, as you are not really sacrificing any of the tablet functionality, but you do get the possibility of more productivity, especially now with x86 mobile chips and the full power of Windows 10 and its software ecosystem. Ryan Reith, Program Director with IDCs Worldwide Quarterly Mobile Device Trackers, commented on the trends:

This momentous shift in form factor will bring along the first significant impact of Windows-based devices that the tablet market has seen,  Windows 10 seems to be making headway in both the PC and tablet markets, mainly driven by devices with larger screen sizes. Despite the free licensing on products under 9 inches the growth for Windows-based tablets will be primarily on devices with displays between 9 and 13 inches. Until we see a day where touch is introduced for Mac OS X and inroads are paved to bring Android and Chrome more closely aligned, we believe Windows remains the logical choice for detachable products.

The numbers seem to show that in 2016, the detachable tablet market will show a whopping 73% year over year growth. Even more optimistically, hybrid device shipments are expected to raise from 16.6 million in 2015 to 63.8 million in 2020. The trends also show that more and more users will be opting for Windows 10 devices, mostly at the expense of iOS. Android is expected to maintain the same popularity on tablets to 2020.

Last, but not least, it is worth noting that the push towards increased productivity will also bring about an elevated interest towards larger devices - screen sizes 9-inches and up. These will surely thin out the numbers of the smaller 7-inch or less devices, but it might still take some time, considering the lack of Widows licensing charges on the latter.

Sick of people saying windows is not good for touchscreens. It is perfectly fine and easy to use with touch. What is primary use of touch screen devices with screens 7 inches or over(tablets)? Videos/music, web browsing, online social media and few g...

Your 'source' appears to be making up figures. IDC's website shows something TOTALLY different. http://www.idc.com/getdoc.jsp?containerId=prUS41­072516