IDC on smartphones in Q1: Android up, iOS down, WP 3rd

Analyst firm IDC released its report for the first quarter of 2013, which chronicles big rises and great falls. There's nothing new at the top – Android and iOS account for 92.3% of smartphone shipments - but the fight for third position is heating up. 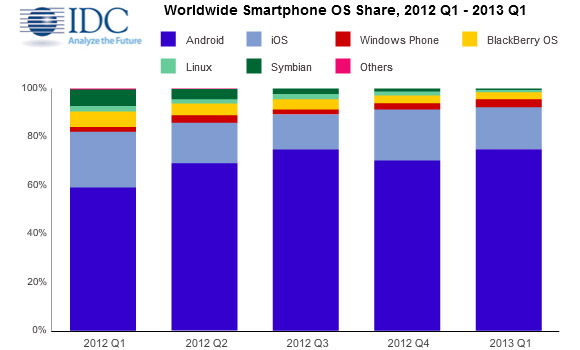 Android is still in the lead (in fact, it's widening its lead) and grabbed 75% of the sales. Samsung is by far the biggest Android maker, with a share of 41.1%. Other Android makers have single digit market shares, with some falling below the 1% threshold.

Android and iOS together account for 199.5 million smartphones shipped in the first quarter of 2013, up 59.1% over Q1 of the previous year.

Windows Phone was the fastest growing OS and jumped into third place with 3.2%. Nokia is the main driver of WP growth, with nearly 80% of all Windows Phone handsets sold in Q1 carrying the Nokia logo. Nokia has shipped 20.3 million Lumia phones in total.

BlackBerry slipped from third to fourth place (6.4% market share to 2.9%) but there is some good news, its new BlackBerry OS 10 has sold 1 million smartphones during its first quarter of availability (that's just the Z10, the Q10 and Q5 were unveiled just a few days ago). Still, the majority of BlackBerry smartphones shipped in the first quarter ran on the old BB OS 7.

Linux held on to 1% market share (down from 2.1%) but there are plenty of new OSes incoming - Tizen, Mozilla, SailFish and Ubuntu.

Symbian saw the biggest decline in market share, down to just 0.6%. Small surprise since Nokia and Japanese carriers (the last bastions of Symbian) have moved on. Still, IDC expect the veteran OS to live on in 2014 with very small shipment volumes.

i am using lumia 520.almost a month and the ui, i feel very boring now. same tiles everywhere. most part of it is plain text, not much graphics. cannot customize it much. seems ios and android more attractive with more colorful and graphical ui with ...

still android and ios are the best. wp8 is a guinea pig.

1. android 2.ios 3. ??? decision pending. coz they are very very very down...underneath not even visible to the naked eye.