Infinix has already made it abundantly clear that its new Zero 5G model is on the way, and that's it will be battling for the title of "fastest 5G smartphone in-segment". That's what a previous set of teaser images alluded to and is the slogan found on a new announcement banner. 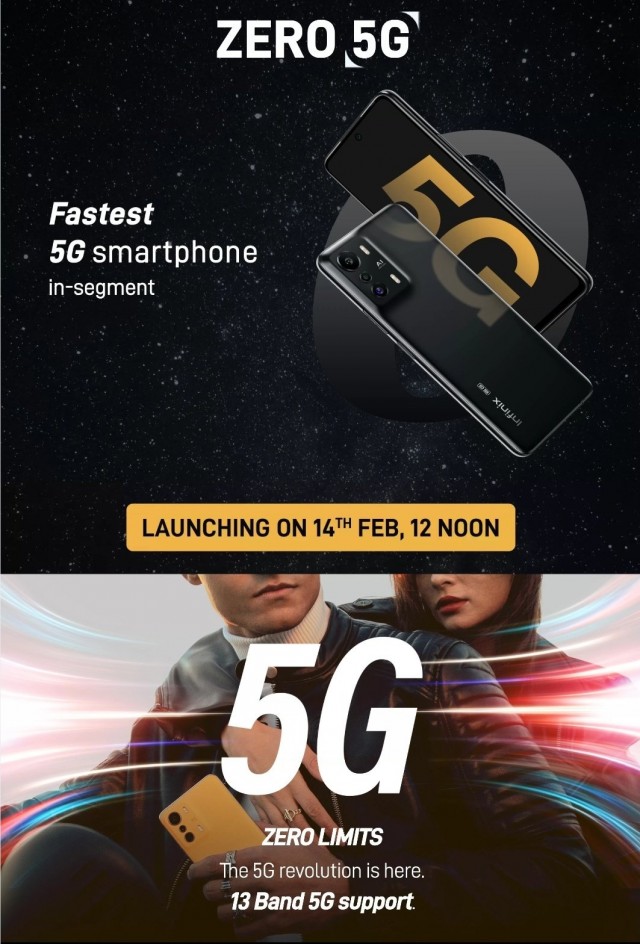 There is, however, a bit of a discrepancy between the two. The new banner has a "Launching on 14th Feb, 10 noon" text on it, whereas the old images advertised the February 8 date. Perhaps Infinix has decided to postpone the announcement event by a few days. Alternatively, we could still see the phone officially announced on February 8 and sales kick-off on February 14. That's the problem with using ambiguous verbs all of the time - a prevalent industry practice. But, we digress.

Infinix has already made it clear that speed and connectivity will be central selling points for the upcoming Zero 5G. It is powered by the MediaTek Dimensity 900 5G chipset, which is not only a step up from the MediaTek G-series chips prevalent on Infinix phones up until now, but also promises to best many rival devices, both in terms of performance, equipped with fast UFS 3.1 storage and LPDDR5 RAM, as well as connectivity, with 13 5G bands. Not bad for a first stab at a 5G model.

The Infinix Zero 5G was also spotted in the wild a few days ago, and we have a few official-looking renders of it, as well. Its overall design is very reminiscent of the Oppo Find X3. In terms of other rumored specs, the Infinix Zero 5G will likely have a 6.67-inch 1080p display, with 120Hz refresh rate, a 48MP main camera, capacitive fingerprint reader in the power button, a 5,000 mAh battery, with 33W charging and Android 11 with Infinix' XOS on top.

it is true, brands like infinix need to work ok their softwares, updates and bloatwares, waste phone brand