Broadwell's reign was short, especially on the desktop where the fifth-gen Core processor barely launched before getting succeeded by Skylake. The first two new Core i7 and i5 processors were unveiled - the overclock-friendly 6700K and 6600K, along with a new chipset and socket for them to work on. 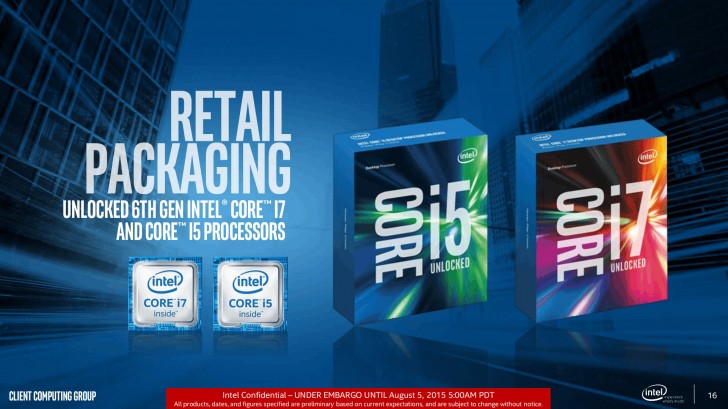 Intel has significantly updated the microarchitecture for the Skylake processors and has worked to make maximum multi-core performance easier for app developers to extract. This is a quad-core processor running at 4GHz base clock speed, going up to 4.2GHz with Turbo Boost.

Another quad-core, but without the virtual doubling of cores (the i7 is Hyper-Threading enabled, the i5 is not). It's clocked lower – 3.5GHz base, 3.9GHz Turbo boost – and has less L3 cache, 6MB. It brings the same GPU, which should outperform the HD 4600 Graphics of older generation processors.

By the way, Skylake pricing has leaked pointing to a number of 65W Core i7 and i5 processors and even low-power 35W ones (clock speeds and price scales down accordingly). The Core i7 6700T, for example, should run at 2.8GHz (3.6GHz Turbo) at 35W. There's nothing on Skylake Core i3s yet. 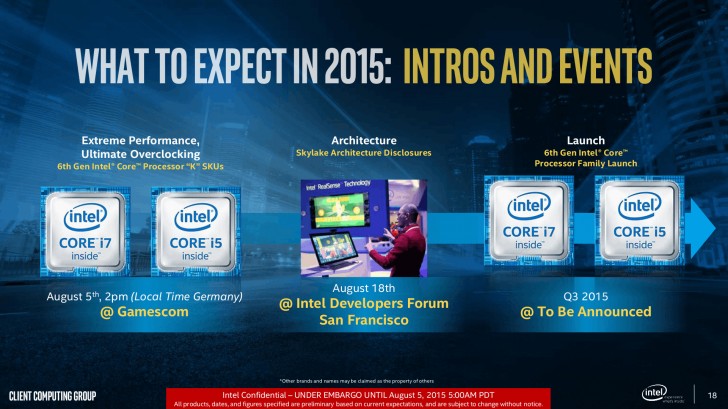 The LGA 1150 socket is on its way out, you'll need an LG 1151 motherboard to accomodate a Skylake processor (not to be confused with LGA 1155, which were from the Sandy/Ivy Bridge era). This comes with a new chipset too – the Z170.

It allows the Skylake-K processors to be overclocked with megahertz precision (instead of the preset steps that Haswell processors allowed). The chipset supports DDR4 overclocking, NVMe Express for fast SSDs, support for PCI-E storage solutions and additional PCI-E and USB 3.0 lanes.

I wish they made i7 with more cores. If you do music production, you can make use of more cores.

Go look up what monopoly means. If you release a product that is better than a competing company it does not a monopoly make. Monopoly means no other choice. Its just that Intel are the best and they destroy AMD

Thought so. Thanks guys Bale9, joonius, brandon, whoever and haqy. :)