Apple announced iOS 11 at the WWDC back in June, but until its official rollout in September iOS is the latest publicly available release. And according to the latest numbers 87% of the iOS devices are running it. 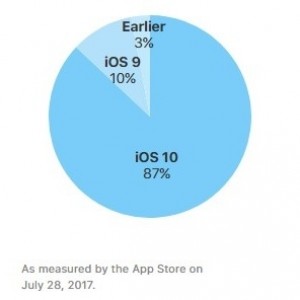 The previous version, the iOS 9, is only on 10% of the devices. Earlier versions account for the 3% left of the pie chart.

These numbers bode well for the iOS 11 adaption - the vast majority of iOS users are obviously installing the latest version available to them.

Why only entry level? Ishit is flagship so compare with flagships

I agree with you !