iOS 5 beta is barely out the closet, already jailbroken

The jailbreak was done using the LimeRa1n exploit, which is used from iOS4 up until 4.3.3. Still it's only a tethered jailbreak, meaning that each time you reboot your iDevice you'll need it hooked up to a computer to work the jailbreaking magic anew. 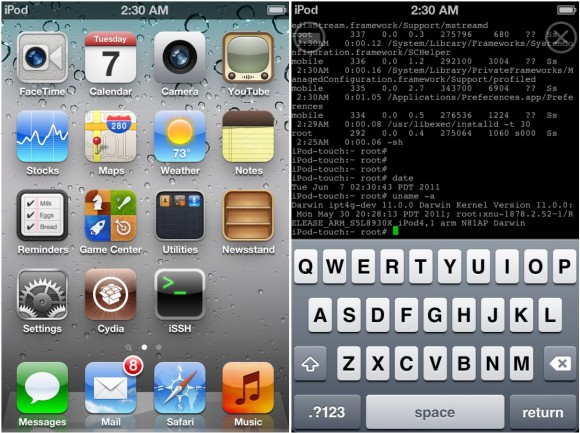 Naturally, people are hoping that an untethered jailbreak will be available for iOS 5 even before it launches in the fall. But it seems that Apple has removed the possibility of jailbreaking iOS 5 (the untethered way) by patching the current ndrv_setspec weak spot in it.

This was revealed by a dev - i0n1c in a tweet, saying that if this is true, then "unthether is dead". Maybe he should have used "unthether in its current form is dead". We'll have to wait and see.

Still, the already available tethered jailbreak will remain available for the iPhone 4 and iPod Touch 4th generation, as closing its loophole requires a change on a hardware level. But with an upcoming iPhone 4S or 5 and next generation iPod Touches, it's highly likely that Apple will close it for good meaning next-gen iPhone hackers will have a new challenge ahead of them.

Sigh... This is not what this is about. Next time, try something along the lines of "well, people don't need to jailbreak their iPhone to enjoy it", it'll get you further. If Apple wants to stop people from tinkering with the inner wor...

sadly this will always happen. the great cat and mouse chase with developers and hackers. things will never change. since the days of the amiga. there is a clever person to develop an OS then an even clevered person to hack it.